Vintage Magnetos - About Us

We are located in soggy southwest Washington near the spectacular Columbia River Gorge where we farmed raising cows and hay. Like many farmers, we never throw anything away and when it breaks it gets overhauled, antique or modern, which led to an incurable obsession to yard rusty rubble out of brushpiles and muddy fields to restore and display and share  with like demented individuals at public events. Our passion is to keep this old technology alive and well.  My personal passion is electricity and forgotten technology. Visit our Magneto RX section for  tech tips gained from the college of hard knocks and other efforts to pool our ignorance and spare others from past annoyances. If you can't find the answere, ask the old croaker and we will research it. 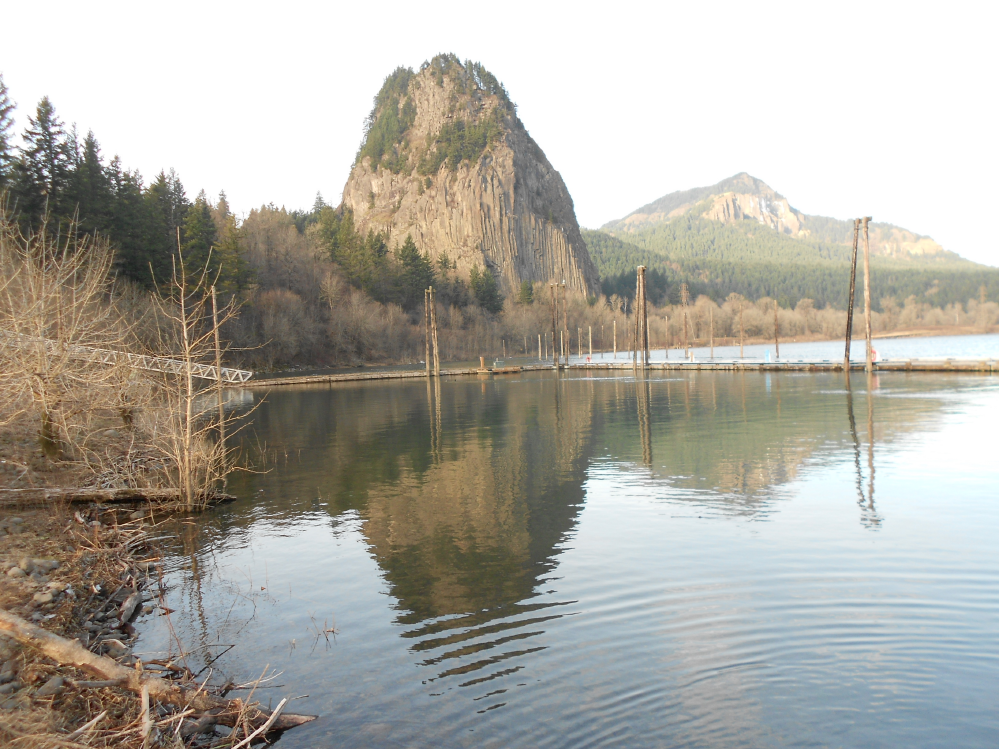 Down the road from Cape Horn is Beacon Rock, the second larges monolith in the world next to Gibralter. A great place to tour when visiting the Columbia Gorge on the Washington side. 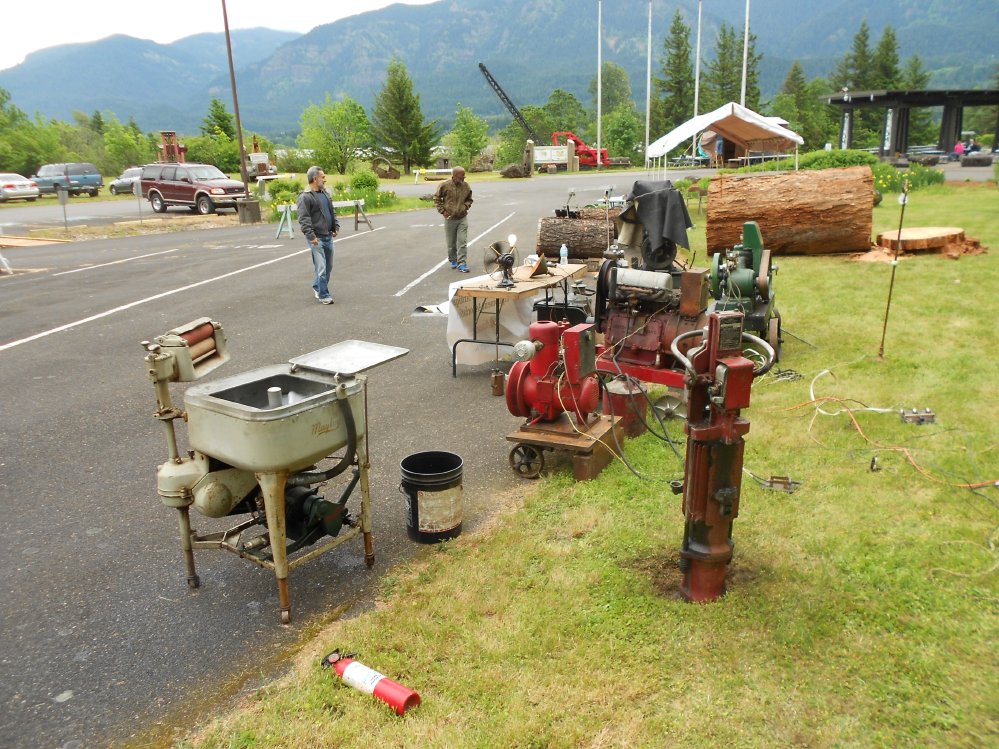 Here we are at the Columbia Gorge interpretive center  west of Stevenson just off SR14 near The Skamania lodge. This is a must see if ever visiting the Gorge. Stevenson is home to fine dining and local microbrews. The mighty Maytag is busy mutilating my jeans and on the right is a Barko Rammer (A gas powered pogo stick, OSHA approved of course). Behind it are two air cooled  Delco 32 volt DC light plants with a Fairbanks Morse in the background. 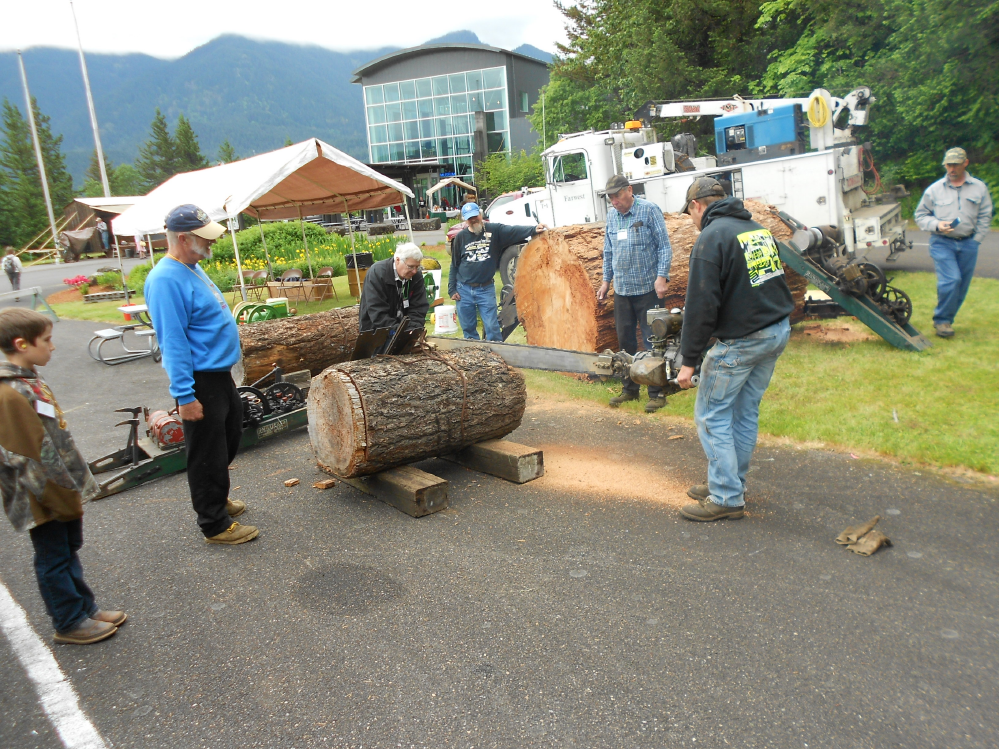 Here is a tribute to Paul Bunyan and the Timber industry with a  Two cylinder Titan bluestreak chainsaw built by mill and Mine Supply of Seattle, Wash. These were lightweight, easy to start and quiet. Are you kidding??? 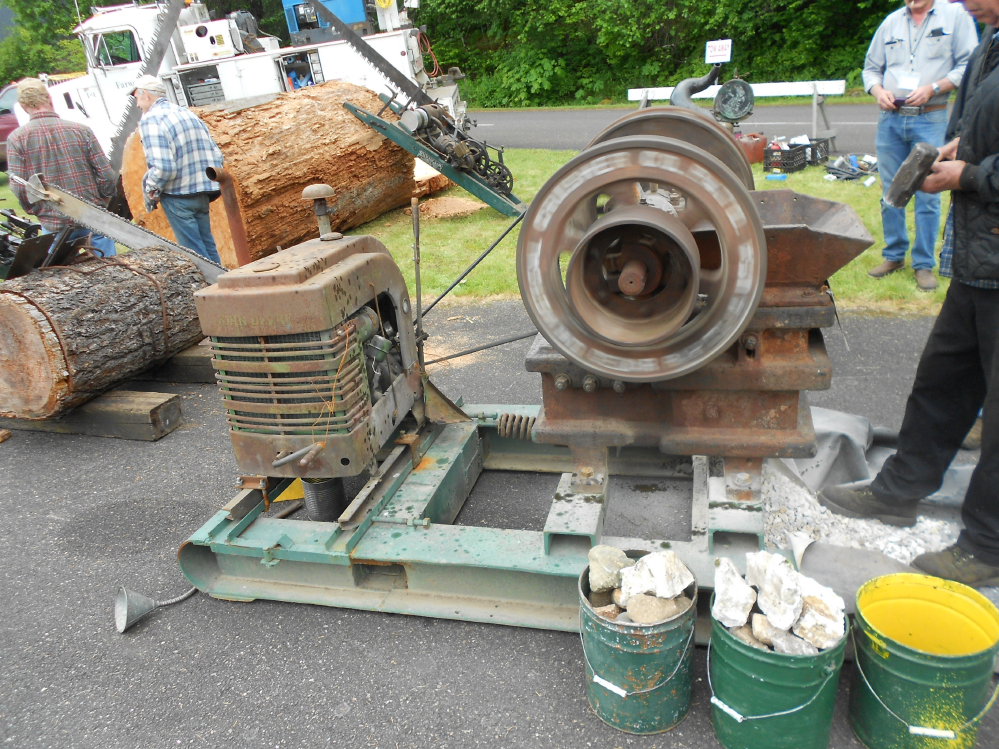 Rock around the clock

Here is an early jaw type rock crusher at work. I would not argue with the gentleman holding the sledgehammer. I don't think he is posing for a baking soda commercial. 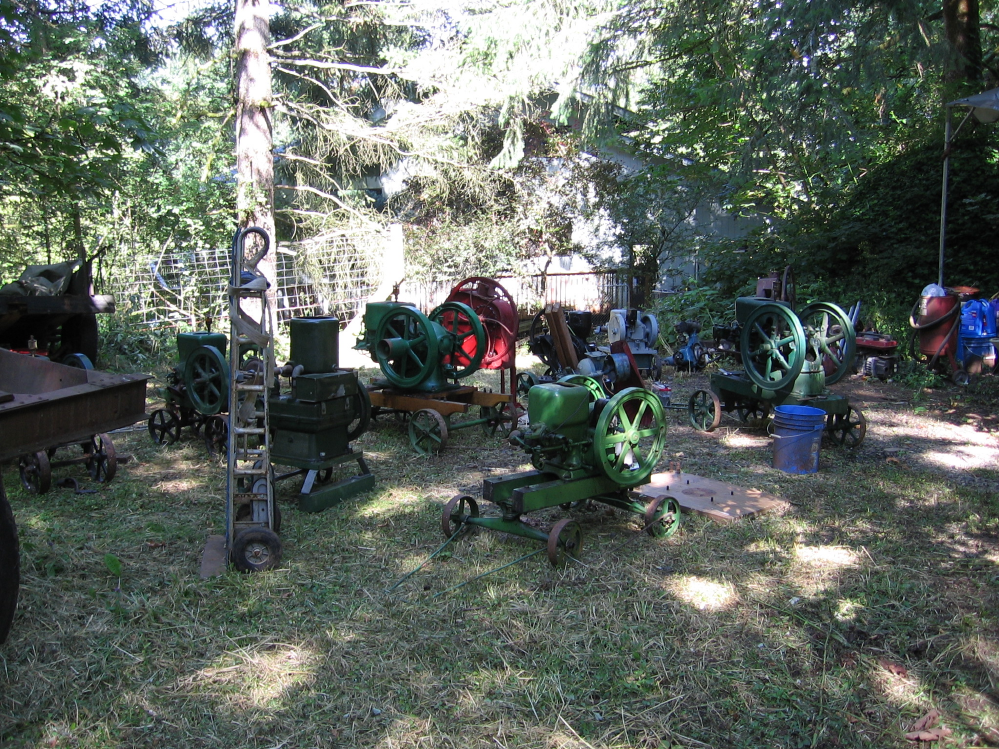 In the backyard Getting ready for showtime! 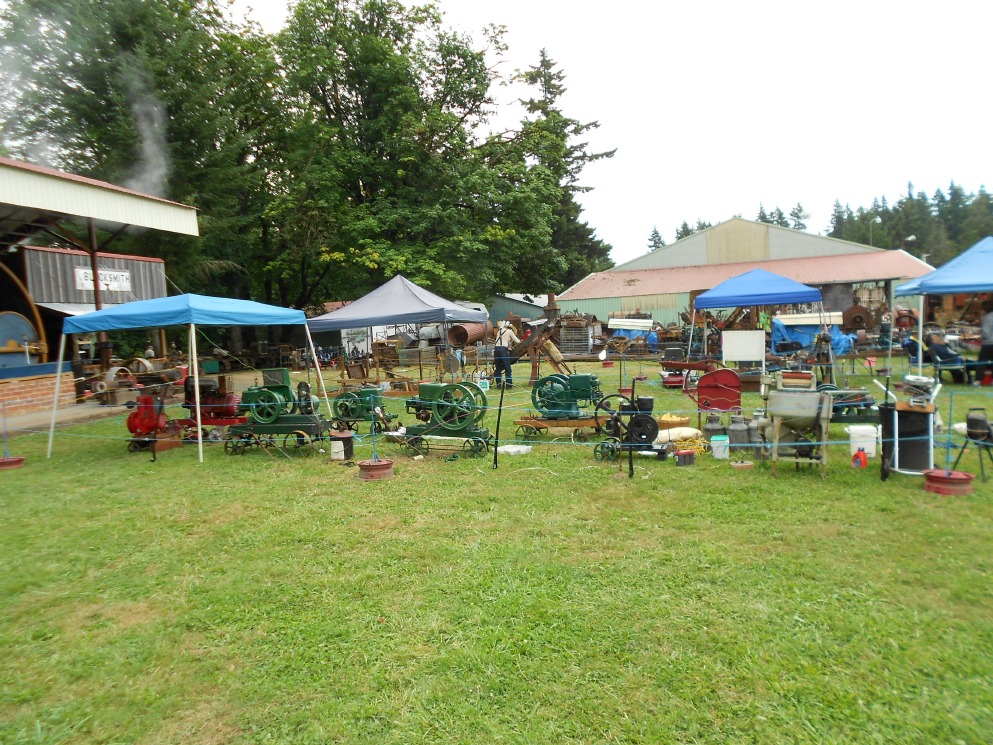 Showtime at Fort Vancouver Antique Equipment Association's Clark County Rural Heritage Fair at Schurman's Iron Ranch in Ridgefield, Wash. Many hours, dollars and mental torment spent bringing these relics back to life. Above and beyond these annoyances, lets not forget to share and have fun with them. It is a great time to educate and entertain the public,renew acquaintances, swap stories, and find more old iron. 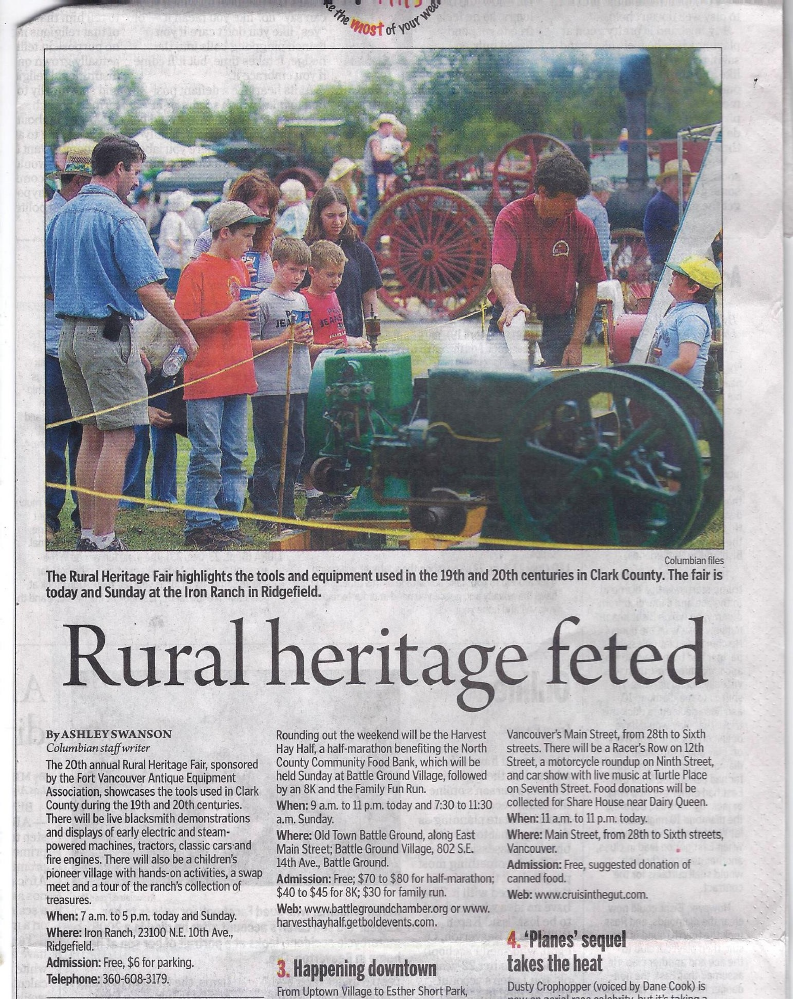 This is what it is all about. We endeavour to make our exhibits interesting and engaging, especially for the next generation. We like to see this old equipment up and running so guests can get up close and see what is going on. Safety first(Follow Early Day Gas Engine and Tractor Association Guidelines for displays),be a good host, and think from both sides of the ropes. 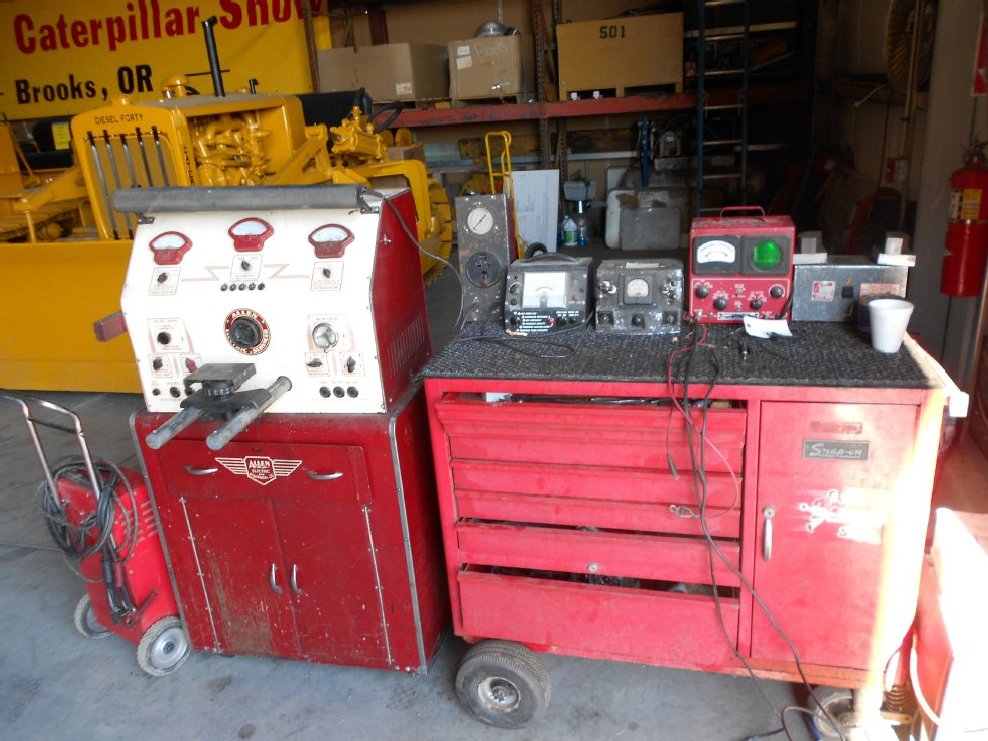 On the road again at the Great Oregon Steamup Caterpillar Museum in Brooks Oregon. Ready for our recomended daily allowance of rust,smoke and grease. 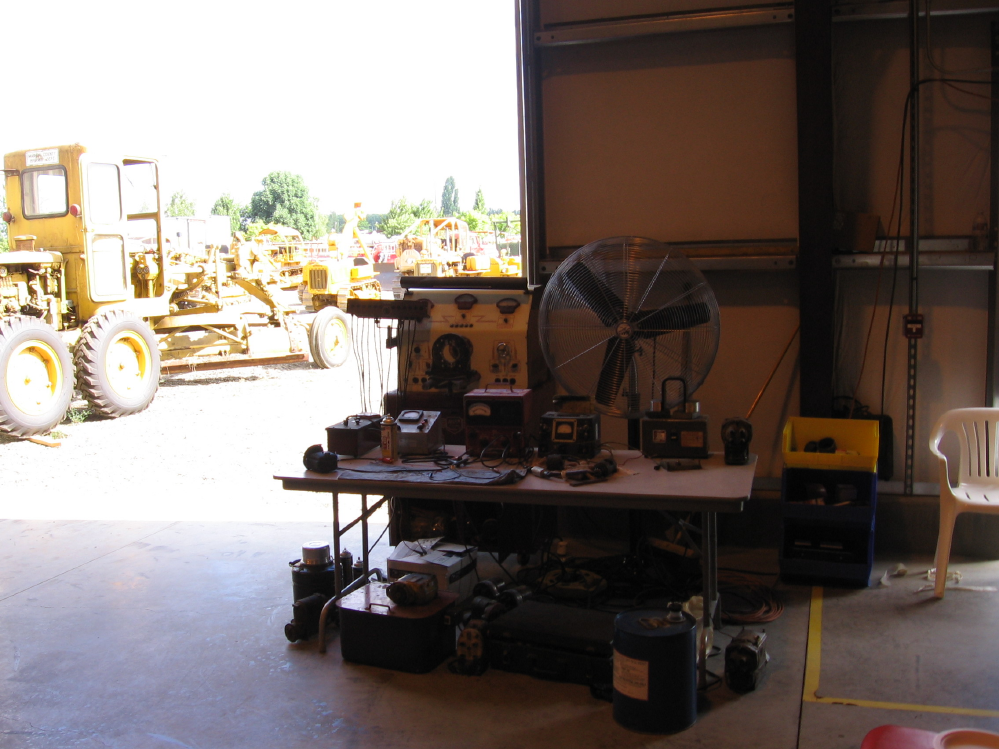 Ready to rumble and tend the wounded at The Great Oregon Steamup Caterpillar Building in July. Many guest's tractors and engines seem to get car sick, they run fine at home but are a no go at the fair. It happens most often when people are watching. Sound familiar? 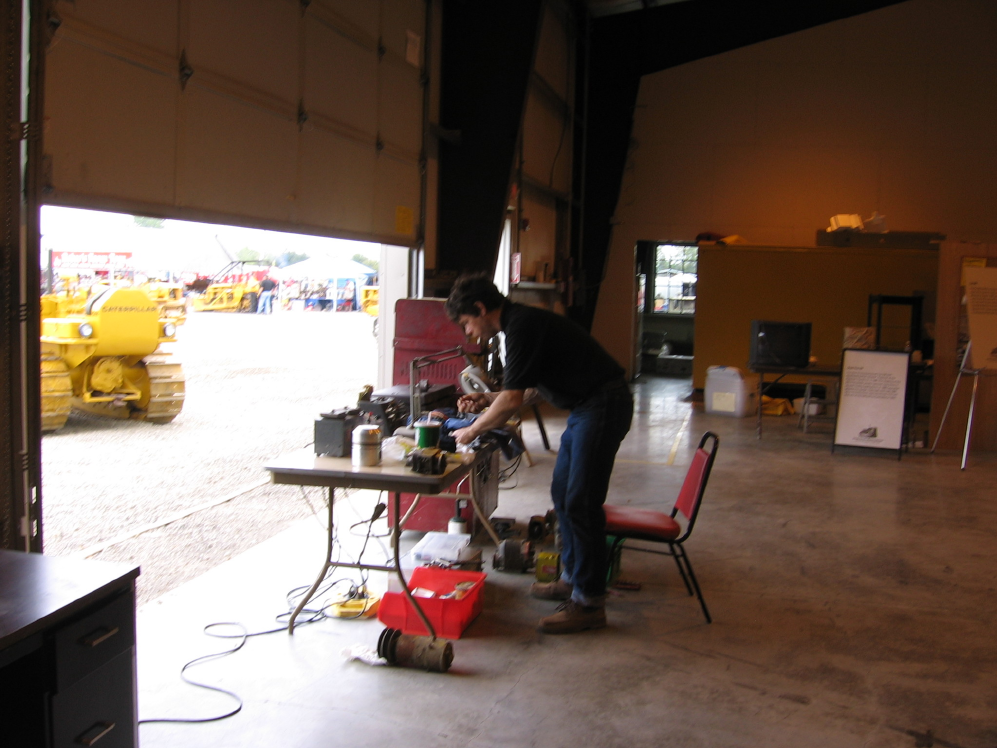 Tending the casualties.Postmortem examination. Ran when parked you say?????? Recently overhauled??? A magneto guy checked it out??? Sound familiar???? Most likely ran barely till stopped. 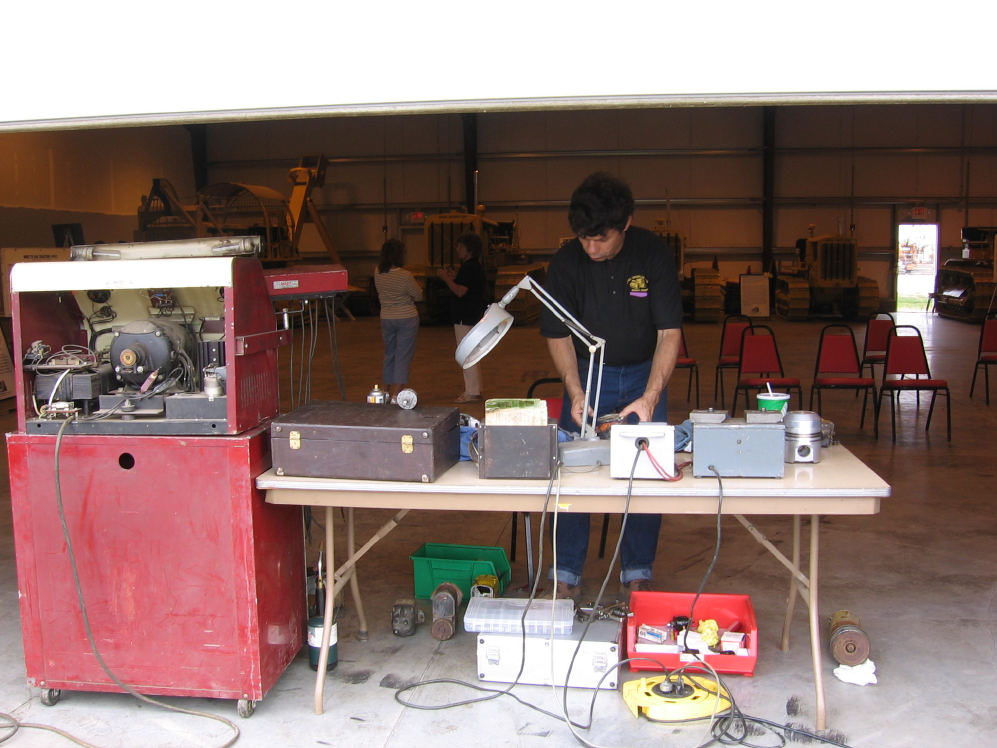 Looks like we grew some barnacles on the points on the way to the show. Annoying but only a flesh wound. The most common cause of failure and the place to check first. Get the rough spots off with a stone or fine diamond lap, then polish with a fine abrasive to a mirror finish and they will stay cleaner longer. 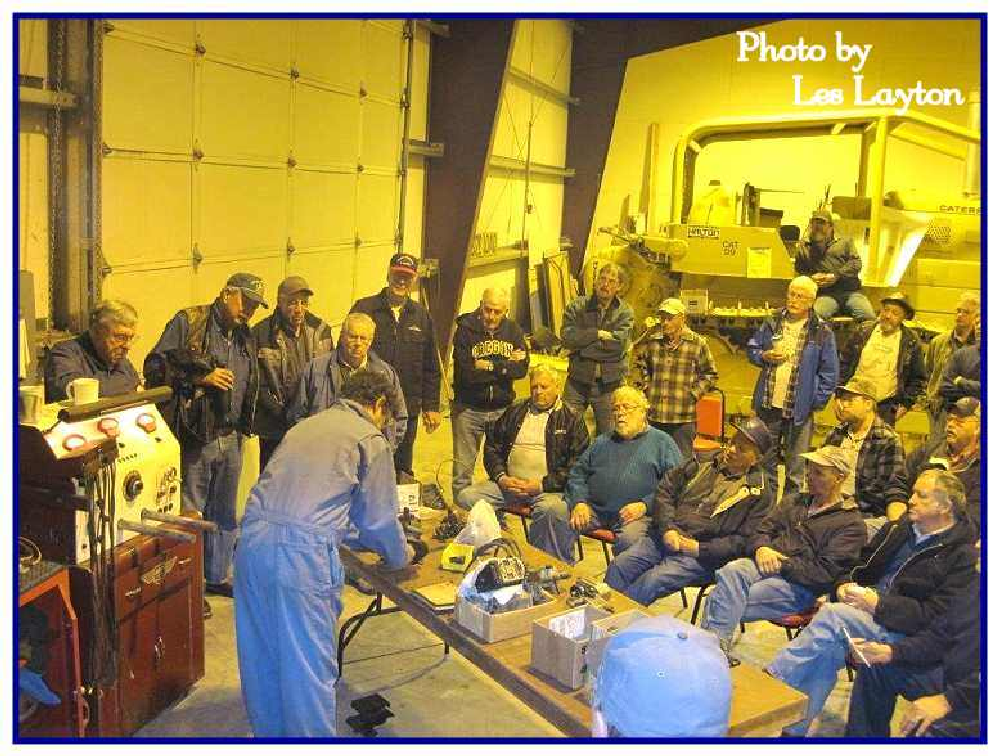 Misery loves company. Back in the Cat building at Powerland in Brooks, Oregon triaging the casualties. 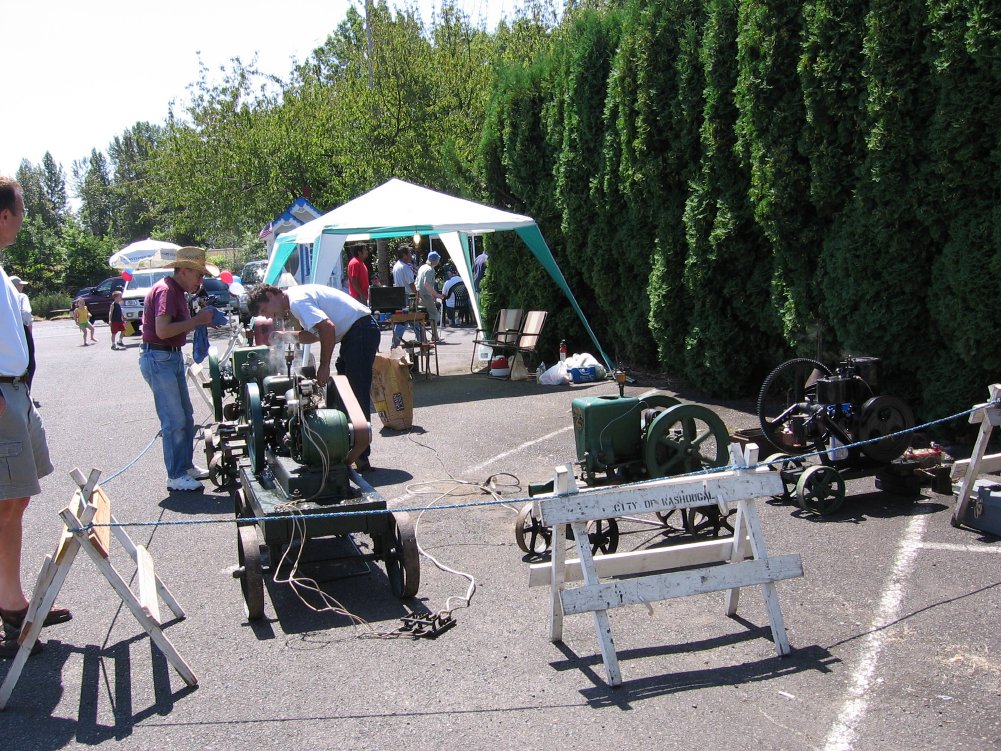 Electrical Engineering and  Making electricity the hard way at the Two Rivers Museum in Washougal, Wash. The wiring is not UL listed and will probably not pass code. looks like the water hopper in the mighty Fairbanks Morse horse and one half is ready to cook the corn and burritos.Mr. Bill is getting the 3HP McCormick Deering M cranked up and ready to grind  corn to make tacos and cornbread with the 1926 vintage Coleman stove in the background. With the sight feed oilers and open cranks the clean rag and white shirt wont stay clean for long. A great day in the gorge to get out and make some noise. Father probably wished that I would  pursue a more mundane, safe and clean hobby like golf.

Father was a research chemical process engineer instilling an interest in science. I grew up amidst boilers,paper machines,and a lab filled with fascinating smells, many toxic,carcinogenic, explosive and radioactive.Mum never told me not to play with electricity so I did and still do. It all started very early with a pair of tweezers in a wall socket (did not end well but survived,tweezers did not) then progressed to highschool chemistry,physics,metal shop where I built an arc welder, amateur radio,restoring antique radios,working in a two way radio shop, night classes at community college in electronics and machine technology, then years and beers later Washington State University with a bachelor of pharmacy,bachelor of science in Agriculture and an MBA. Pullman, Washington (Home of WSU) was also a good place to look for rusty iron. Friends and coworkers are often bewildered and disgusted that while  on vacations and outings  when traveling through beautiful scenery I am focussed on rusty iron lurking in fields and old barns! 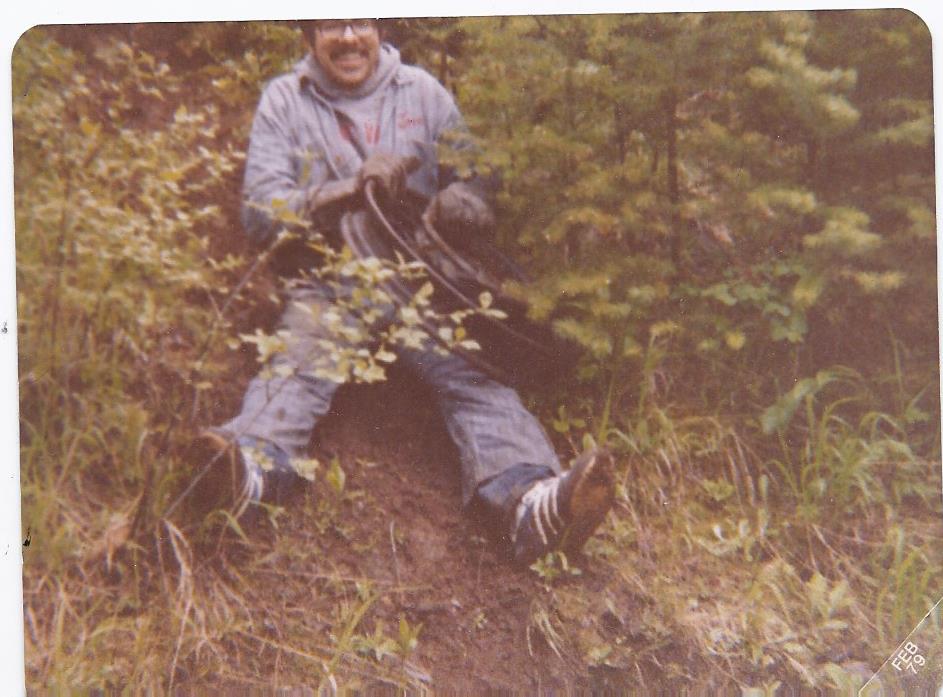 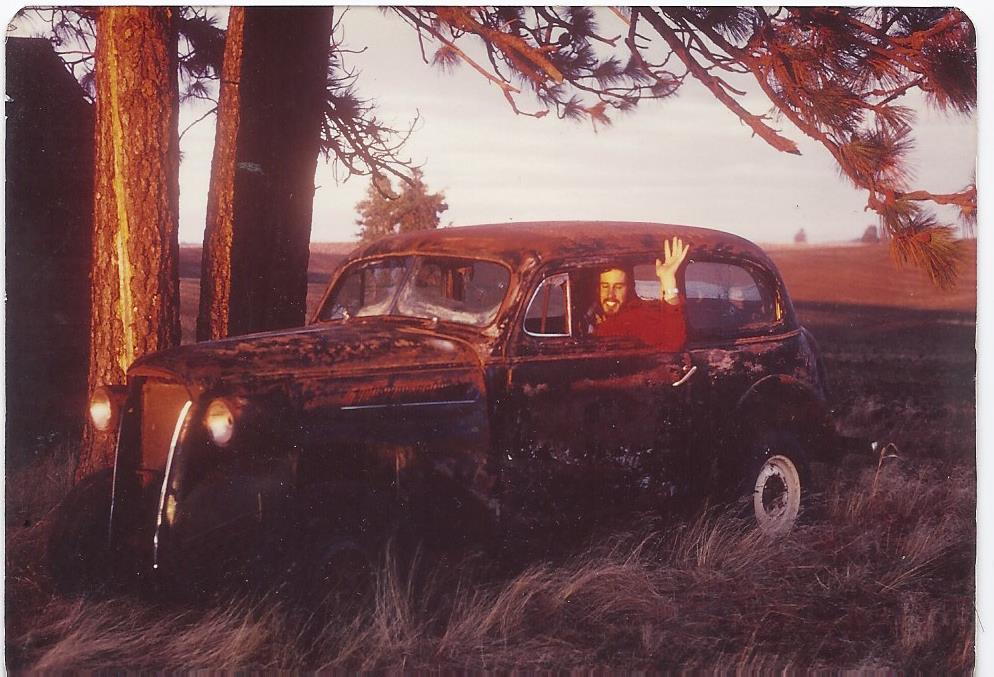 This one actually did run when parked despite missing fenders, floor, grille and 5 below zero. Good times. Graduation was a very sad day! 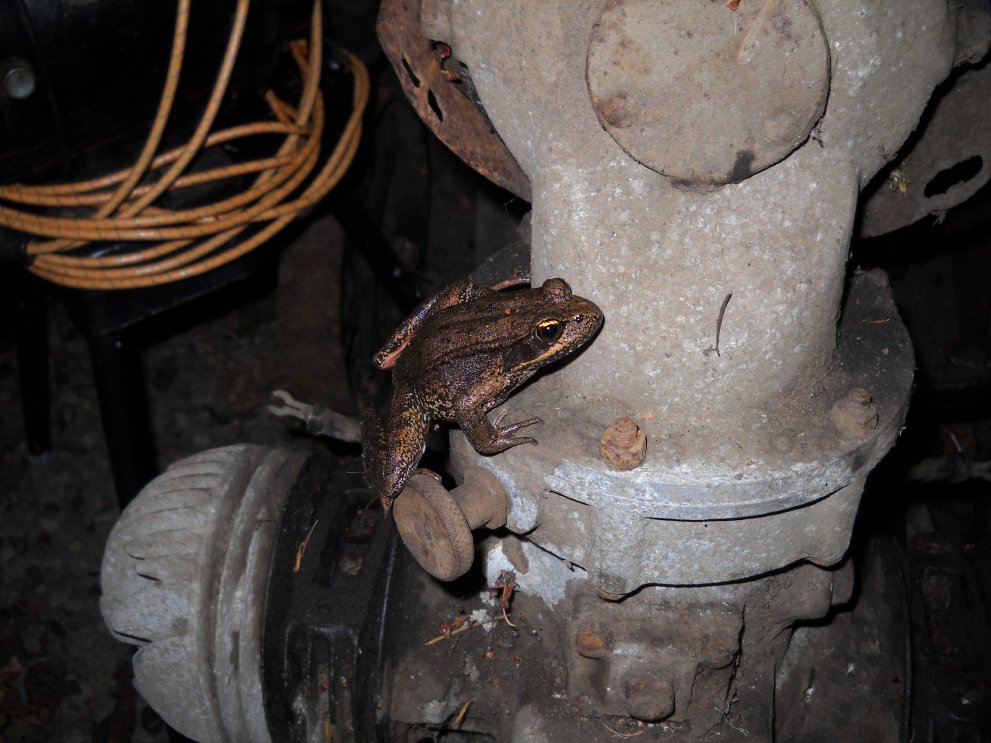 Friends in the swamp where its always cold and damp. This is an early Washington built two cylinder Titan Bluestreak chainsaw and an investigating Western Red Legged frog.

The amphibian residing in the back lot amidst antique engines, tractors and Caterpillars is not the usual backyard froggy but what Mark Twain described as The jumping frog of Calveras County where he spent some time in Angels Camp,was the rare and endangered western red legged frog, much larger and higher jumping than his green suburban cousins.Red legged frogs are endangered from loss of habitat and invasive bullfrogs that consider them fine cuisine.  Frog jumping is serious business at the Calveras County Fair/Frog jubilee which started in 1928 with bullfrogs as red legged frogs are endangered. In 1986 an ambitious amphibian named Rosie the Ribiter made a record jump of 21 feet. 5 3/4 inches 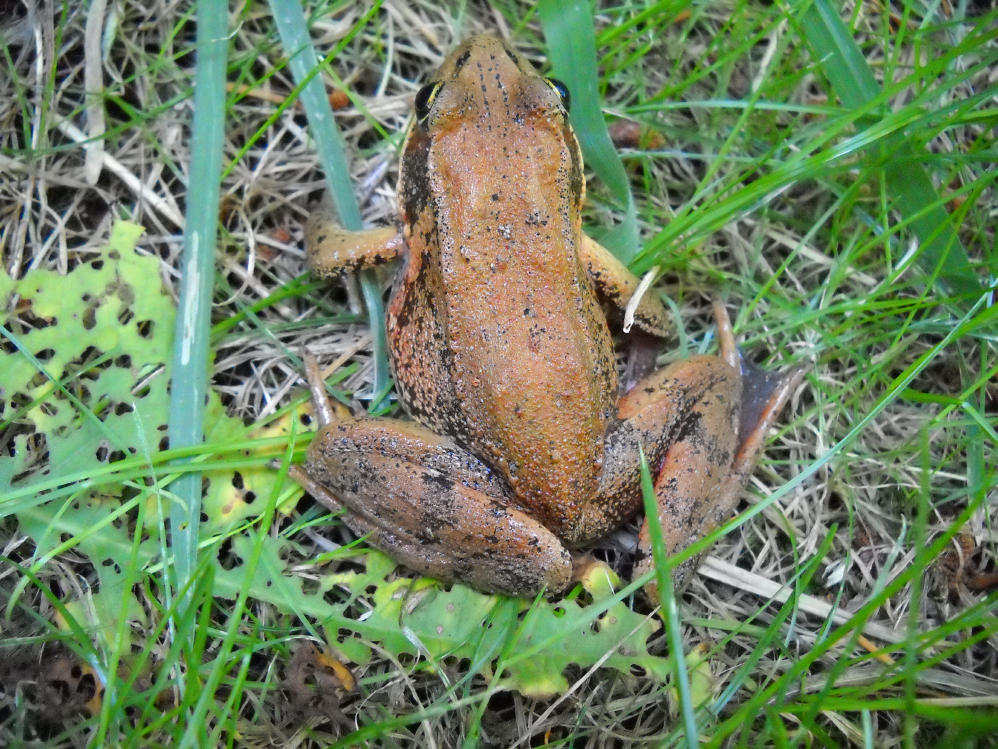 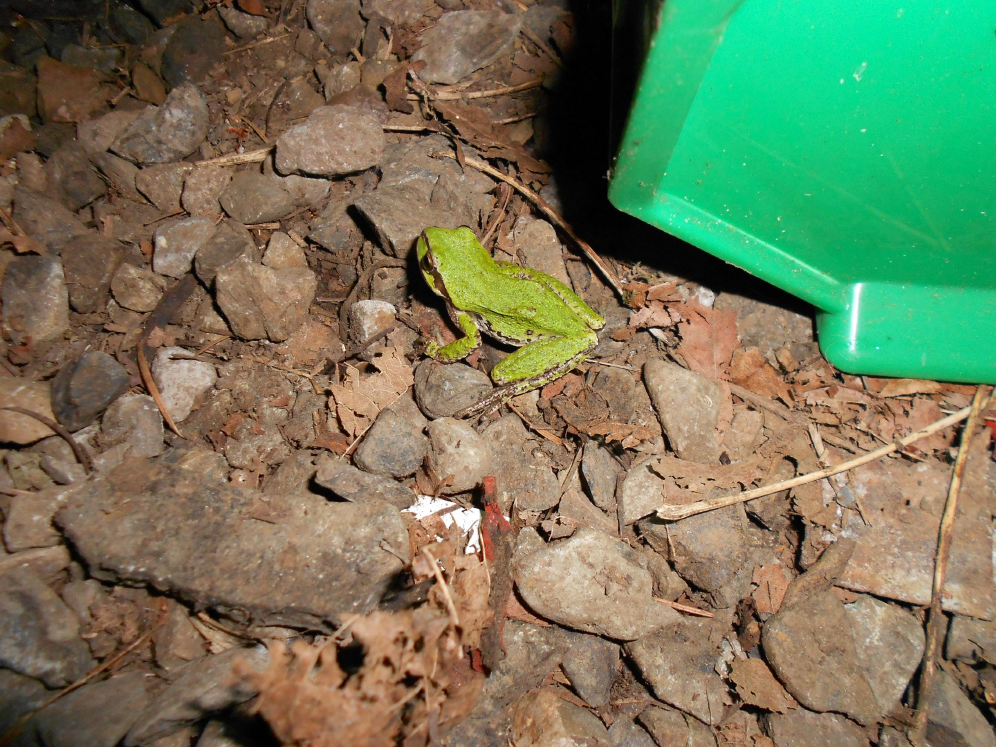 Burning the midnight oil (literally!) with an Eisemann CM4 for a Caterpillar 22 getting ready for

Its showtime in July at The Great Oregon Steamup

Its showtime in July at The Great Oregon Steamup in Brooks, Oregon.