Before the famous Delco Remy brand appeared there was the Remy moniker which appeared till about 1927. Our 1927 International Truck has the later Remy branded ignition equipment. The early Remy equipment used a large low tension magneto with a dash mounted coil and dry cells.

The later Remy system began to resemble a conventional battery and coil with a distributor and life got much better. More about that monkey business in the battery and coil ignition system page.  The battery and coil arrangement worked well but installing the condenser in the coil case and covering it with black sticky goo was not a compliment. The old saying of the day was that when the condenser goes, you don't. Many Remy installations will be found fitted with later coils. There were  issues that typically befell dry type coils of the day. The tar would expand and contract sometimes breaking the lead wires to the terminals, sometimes moisture would get in and cause a short and/or insulation would fail causing the coil to fail when it got hot.

The early Remy system used the low tension  magneto as a distributor with a bank of dry cells to get started and if you got started, you would switch over from battery mode to magneto with a kick switch on the front of the coil box.  Another feature was that in the battery/start mode there was a small button that was connected across the breaker. Theoretically, one could roll the engine to just past top center, prime the cylinders, then press the button to fire the plug and off we go. At past top center, the points will have opened allowing use of the button. The magneto is an independant AC generator(Alternator) that supplies the coil when(and sometimes if) you get started in battery mode. Here is some info to hopefully spare some grief. 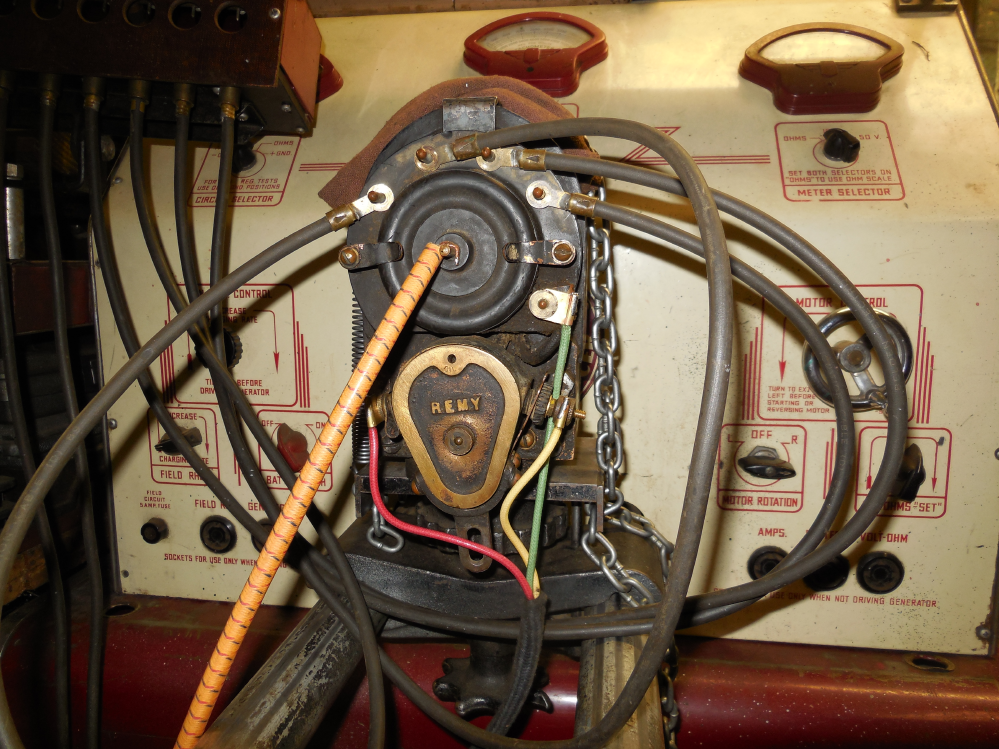 Here is the magneto connection up close and personal. Fortunately, Remy used the same wire colours and connections for different magnetos. The red wire goes to the magneto chassis and serves as a ground.  The location of the magneto ground(Chassis) connection varies with some models but serves the same purpose.  The green wire is the hot wire from the magneto. It is where the connection is made to the centrally mounted low tension winding.The other end of the low tension winding is grounded to the magneto chassis.  The yellow wire connects to the breaker terminal. Some magnetos( Model RL) have the condenser mounted in the coil box and others gave the condenser mounted on the magneto under the arch of the magnets. These are nearly always bad. Almost any automotive condenser rated at 0.2Microfarad  will work.   The high tension wire from the coilbox is a 7 or 9MM and connects to the center of the cap to feed the distributor rotor. 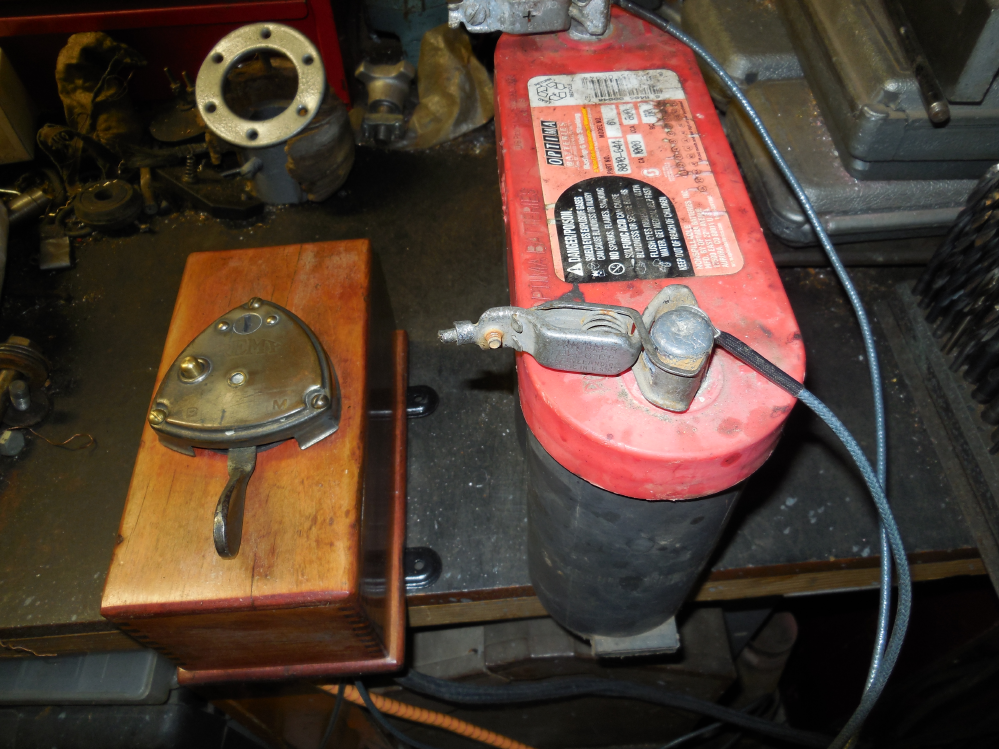 The coil and kick switch are shown here. The button on the left id for starting when the engine is rolled past top center and primed.  The two black wires coming from the coil connect to the bank of dry cells for starting.  We are using a 6 volt battery for starting but for sanity's sake, the coil operates on 3-4 volts. In the battery starting mode the battery current goes through a resistor before the coil to prevent damage to the coil. 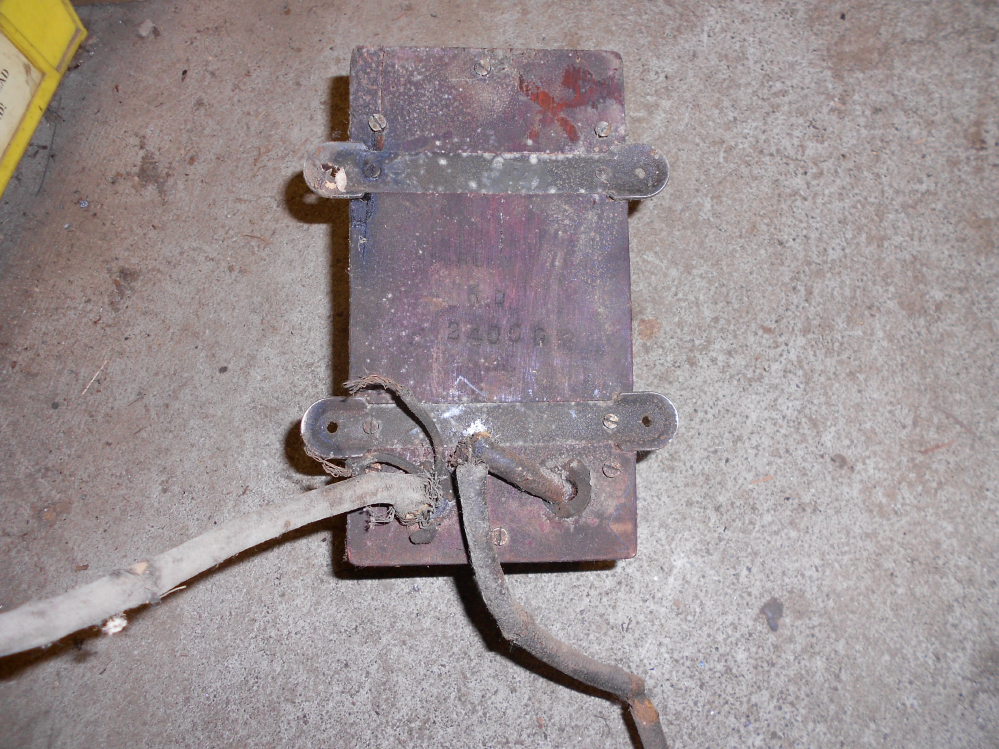 This is very typical of the harness from the coil box to the maggie. The two short wires are the black leads that connect to the dry cells for starting. The large single wire on the right is the 9MM high tension lead. The multistrand cable is typically frayed and broken. The best RX is to replace all the wiring for safety and sanity's sake. 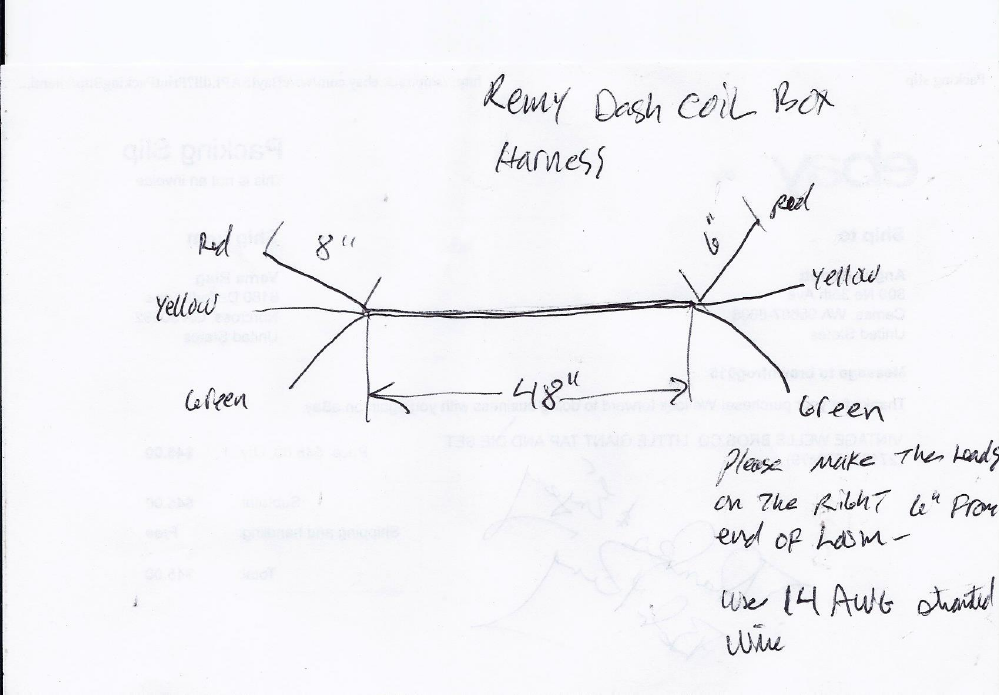 Here are the approximate dimensions of the multistranded cable. Fortunately. remy used the same colour scheme with nearly all of their low tension magnetos of the day. We have yet to find an intact battery lead to compare. If anyone does, please let us know and we will share.  Also for safety, be sure and place an inline fuse in the starting battery circuit with a switch even if you are using the mag as a distributor with a separate coil and battery. YNZ's vintage parts of California made this one for us. The ends of the wires connecting to the maggie originally had flag connectors ith holes for #10 screws. We have not found  a source for these yet but they can be made with shimctock or copper tape and punched for the screw size.