Here are some images of the MJ Series from a 1945 catalog to share: 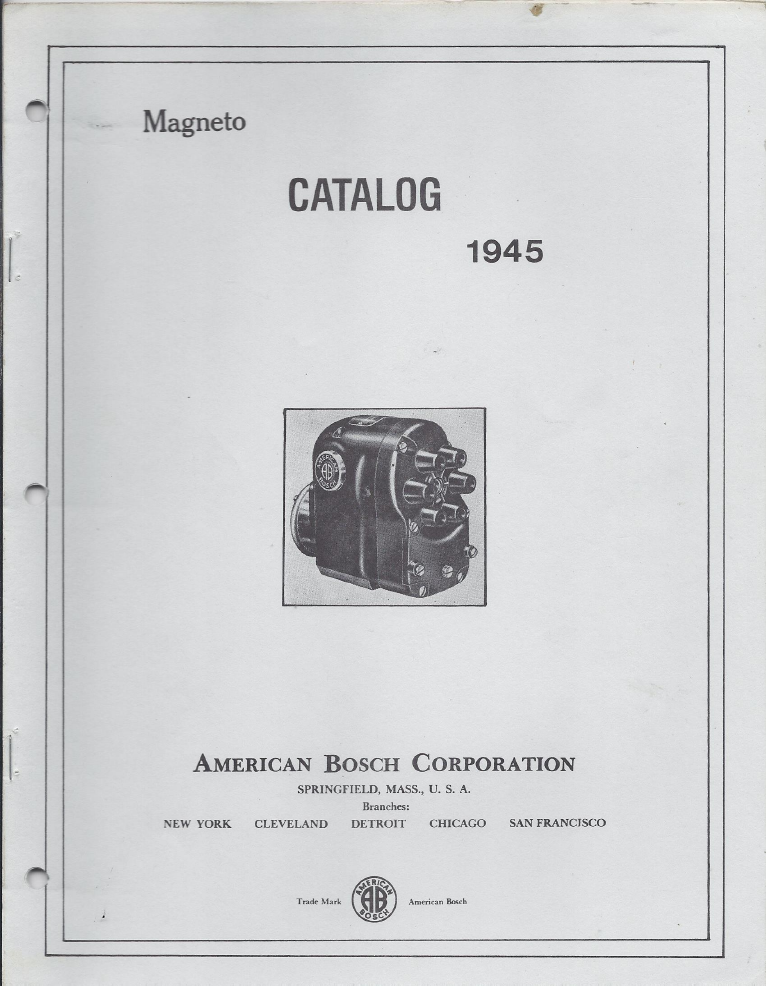 Fewer moving parts,plug in wires and stronger magnets were certainly welcome.But not so fast, the DU4 and ZR4 still make a hot spark even when all is not well, tired coil, leaky condenser, weak magnets,dirty misadjusted points, and a heaping helping of the usual dirt, moisture and old grease. Some early literature states that the wound armature design produces a fatter longer duration spark than the later stationary coil or battery and coil design. Some early Eisemann research literature suggests that this is a better ignition system for larger engines like used on the Caterpillar, Oil Pull, especially when the spark plug is not located in the most advantageous part of the combustion chamber. This is described in part  in the Eisemann Magneto Rx section. 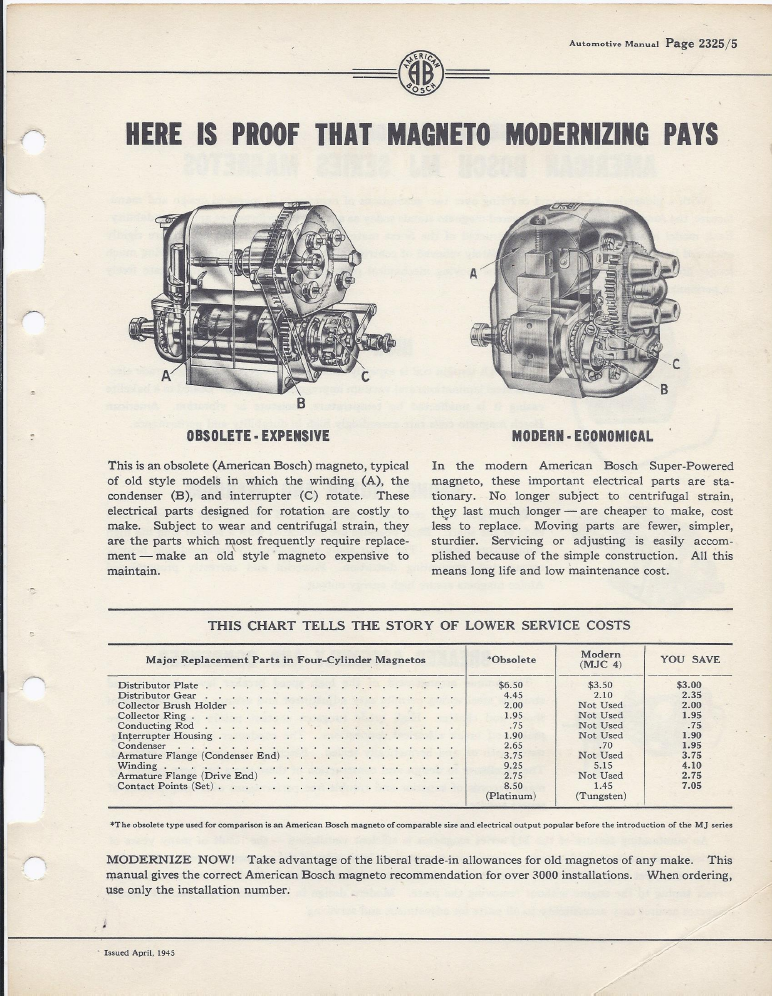 The stationary coil was a big plus. Always be carefull not to get too rough with the two 1/4-20 setscrews holding the coil in place as they break

easily. The breaker plate is well designed and very trouble free. For some reason, the hex headed screw that anchors the points spring has

American 10-32 threads and a 5MM hex head. That is why your ignition wrenches will not fit.A 5MM open end wrench works great. 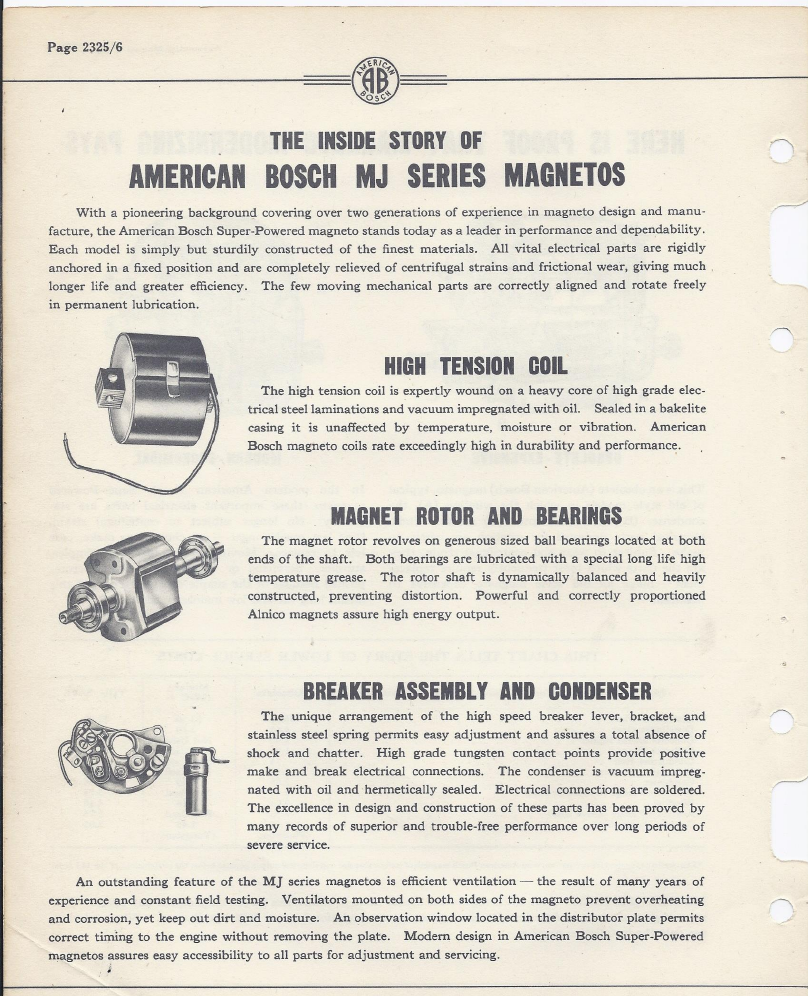 The MJA is probably the biggest and baddest of the lot. They just plain work even when all is not well. They have power to spare. If they are in

any state of repair and you can't get going, best check your petrol. 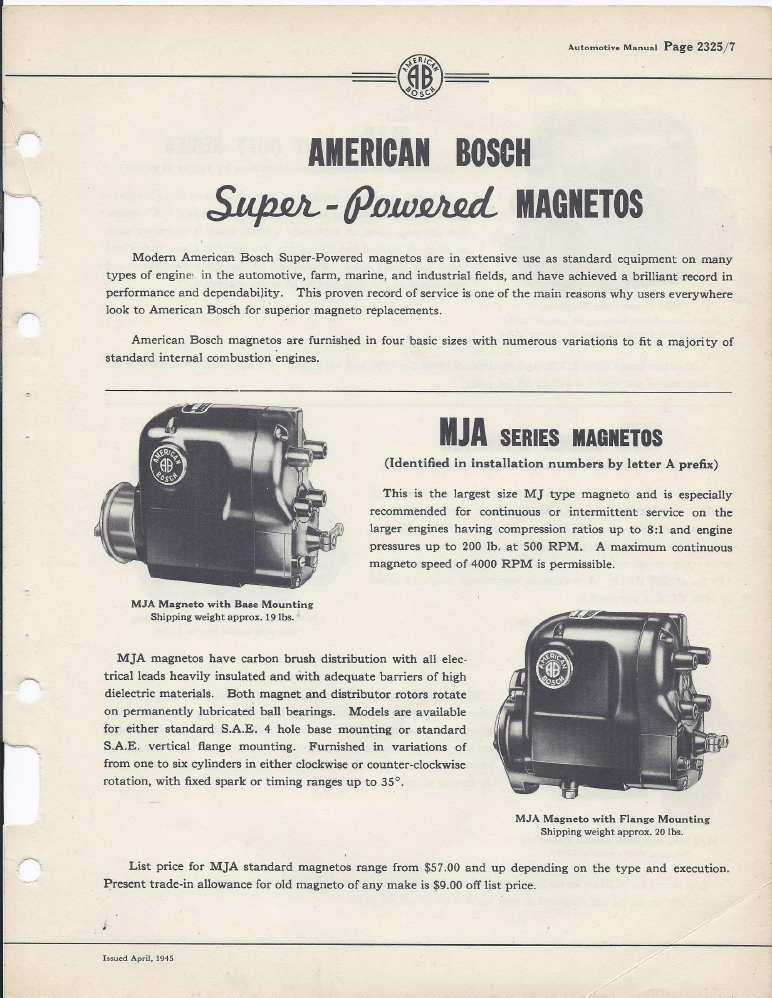 If you have an installation that does not use a manual spark advance and you have a magneto with an impulse coupler and a manual advance lever, simply leave the lever in the full advance position. The magneto is configured per factory service specs such that there is maximum output and optimal magnetic rotor edge gap in the full advance position.  The impulse coupling will automatically advance and retard the spark.  The amount of advance offered by the impulse coupling is referred to as the lag and is adjustable on the base mounted American Bosch products by removing the impulse coupler, loosening the 4 cup(Arrestor plate) fastening bolts and rotating in the direction of shaft rotation to increase lag. The converse is true. Often the manual impulse lever will not move due to the often corroded steel shaft seizing in the bushing in the cap.One needs to remove the lever, use heat if the screw won't come peacefully, then remove the C-ring on the shaft and flatwasher, then soak in penetrating oil and gently tap it out, then polish and grease the shaft. 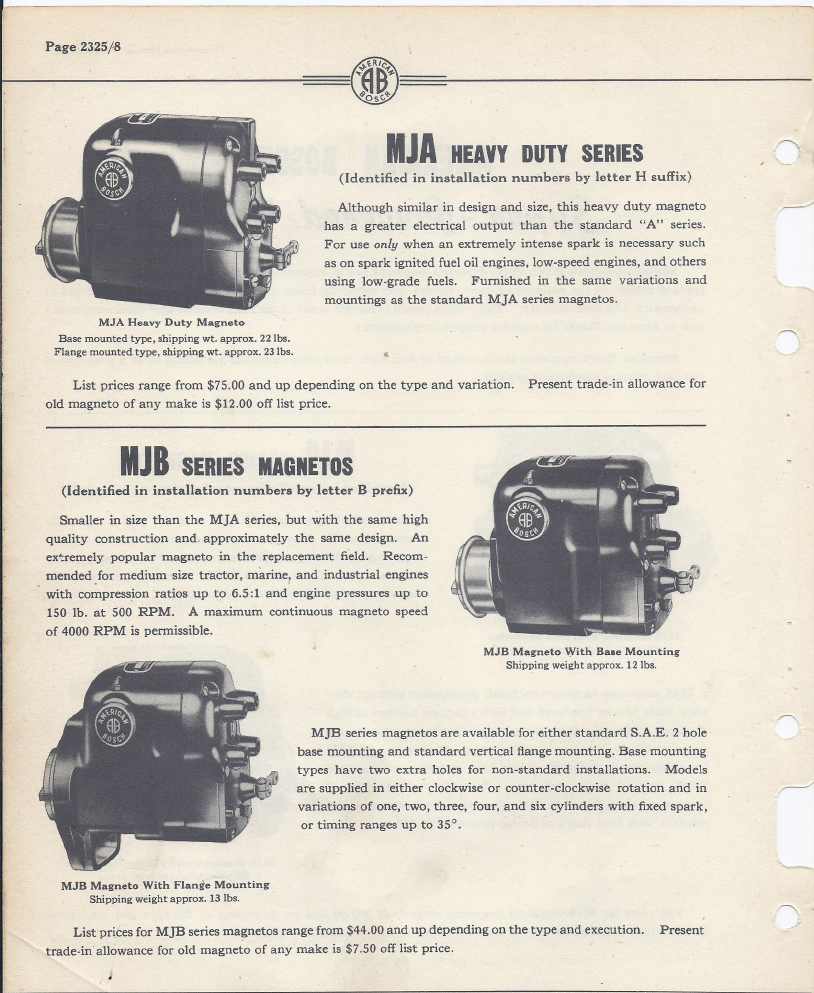 The MJB is also an excellent mag, slightly smaller magnetic rotor and coil, and uses a bronze sleeve bearing on the distributor rotor shaft in lieu

of a ball bearing in the MJA. The MJC is the smallest of the series, smaller rotor,coil and a more primitive distributor rotor system. It was designed

for smaller low compression engines and a lower price point. It is still an excellent magneto. This model disappeared from the catalog somewhere

in the late 1940's and was OEM for some manufacturers. The MVA is a strange beast that debuted briefly for small engine applications. 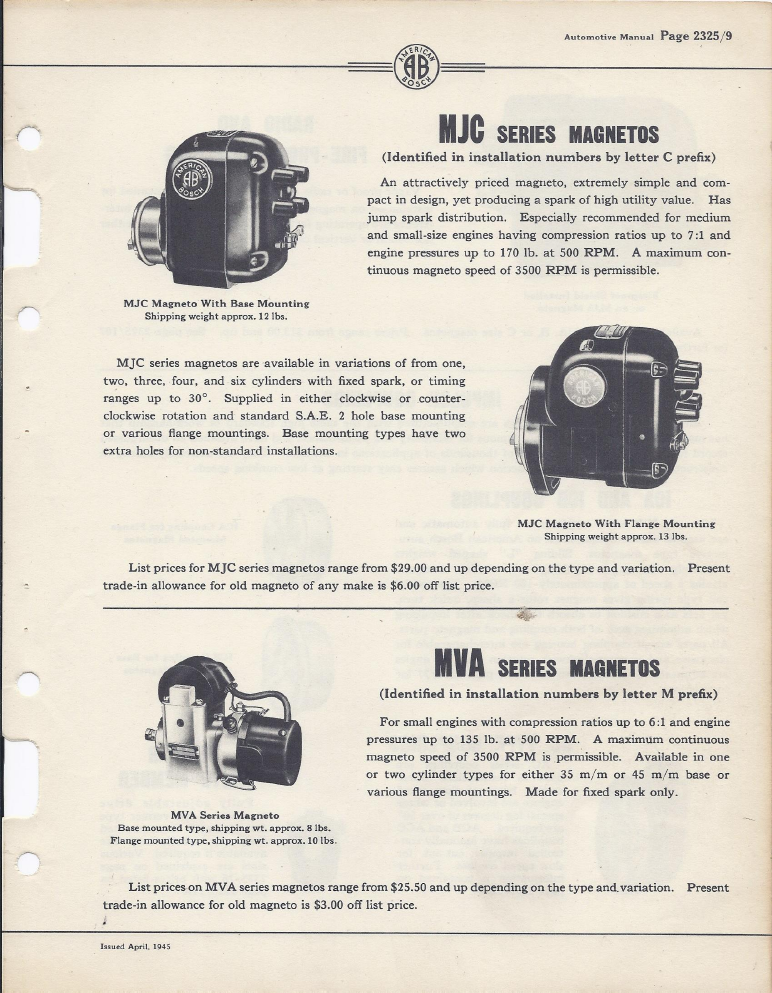 Shielded devices were often used in generator sets to prevent radio interference. They can be used in other installations as well.

The ICB and ICA couplers were a welcome addition to traditional "Armstrong Starting" and probably saved many broken arms and discouraging words.

If you plan to remagnetize the rotor, do it with the impulse removed or the impulse will get magnetized as well and hang up and not engage. If you

have an impulse that hangs up despite smooth operation and good lube, it may need to be demagnetized. The trusty armature growler will do the job.

Lay the impulse coupler on the pole shoes and turn it on for a few seconds. Fairbanks Morse couplers are the most susceptible to this issue that can drive you
looney when they are well lubed and move freely, yet stick to the drive cup. 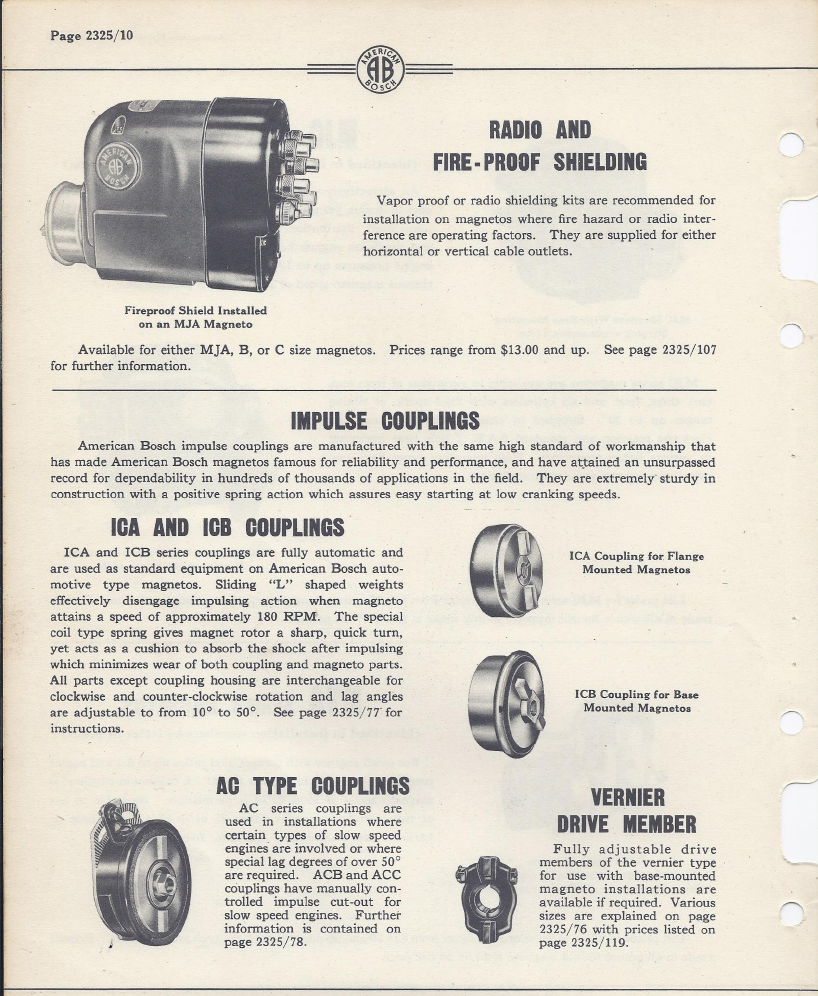 This will show how these impulse couplers fit together.  The special puller that threads into the threaded holes in the hub can also be emulated by using  two grade 8  1/4-28 bolts. Thread them in tight, not to the point of stripping of course and the hub will usually pop off. If not, thread a nut over the armature shaft and give it a smack with a brass drift or hammer with the pull bolts threaded in tight and it will let go.  Remember to remove the half moon key before pulling the armature shaft out of the housing or it will broach a slot on the way out. Note that there are two keyways on the hub. For clockwise rotation, use the keyway marked "C", for counterclockwise the other keyway may be marked CCW or A or ACLW. If the wrong keyway is selected the mag will snap at the wrong time, that is, when the mag is not firing causing poor performance and hard starting. Be sure and disassemble the assembly, especially the cup and spring to be free of dirt and rust. Put some grease inside the cup and on the spring carefull to keep it away from the dogs that must slide freely. If the dogs and the hub surfaces they slide on are rough or corroded, polish them shiny and smooth with emery cloth with  piece of keystock as a backing so the parts slide smoothly. Roughness and grease and dirt can cause the dogs to not slide down and engage the impulse. This may cause hard starting and a kickback risk as without the impulse engaging, there is no spark retard. Always practice safe cranking and be sure the tractor is out of gear! 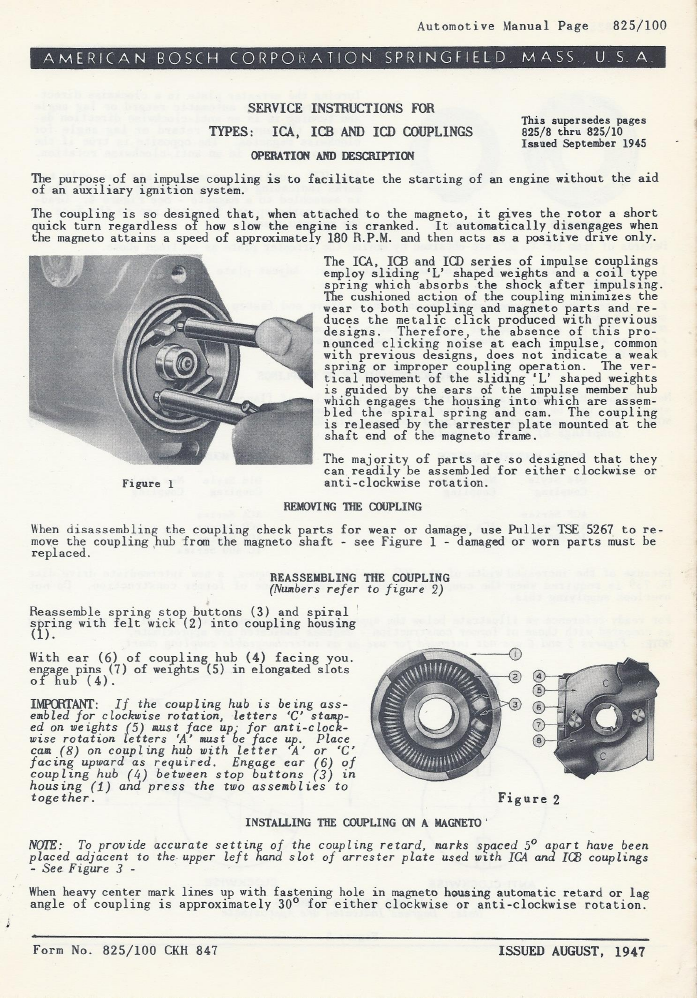 This describes how to change the lag angle for specific engine specs. 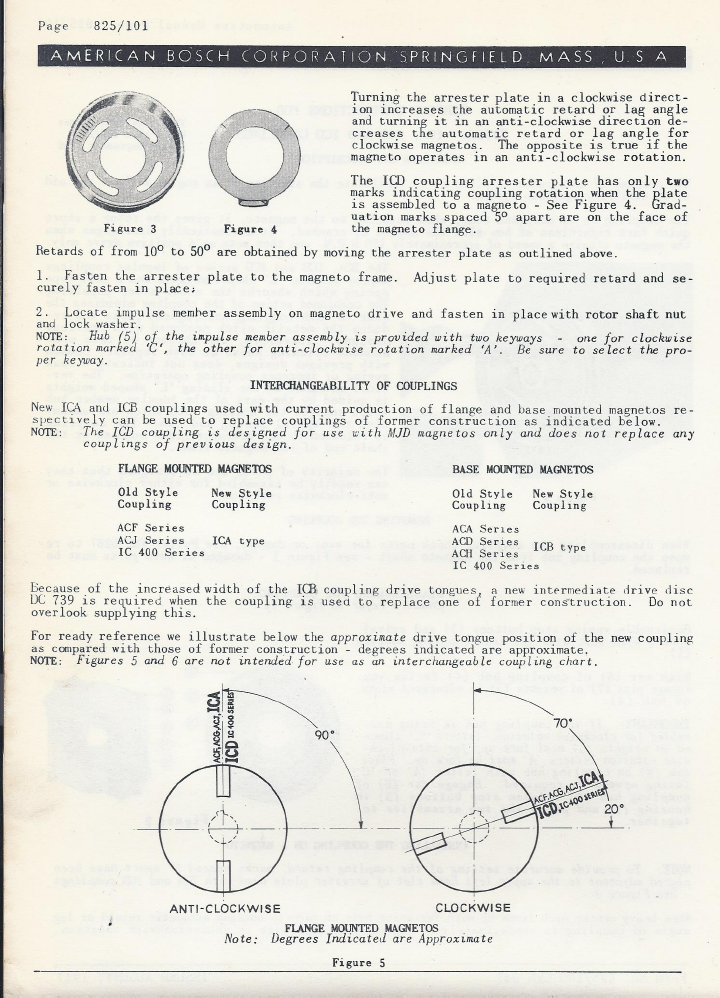