The model R is probably one of the first if not the first Fairbanks Morse magneto. It was a step toward vertical integration with the burgeoning farm engine market and may have been in self defense with the early outsourced high maintainence make and break ignition systems and the rather annoying American Bosch AB33 and the even more annoying AB34. It is a hot reliable mag and probably worked well back in the day. It was available as a straight gear drive which could be ordered with an impulse for easier starting on 3HP and larger engines. Many original mags survive today in working condition. They suffered from the usual woes of a wound armature and sticky goo from insulation seepage and condenser issues. The rare, elusive and expensive R2 was a special configuration used briewfly by John Deere. more to follow on this one later.

The contacts by design on the make and break systems self destructed, there were many exposed moving mechanical parts subject to dirt, grit, lack of lubrication and wear. Timing was critical on early low tension magnetos as their output is a sine wave and as a result produces maximum output for a short duration of rotation. If wear and/or vibration caused the points to open when the mag is not producing maximum output, they would soon be hard starting and eventually a no go.  Some were oscillatiing creating a shock load on moving parts and failure.

The American Bosch AB33 was an oscillating high tension mag that was probably an improvement, but suffered from insulation failure and condenser issues. The AB 34 was an attempt to make them cheaper. it had similar issues along with a tendency for some to break apart. Even more irritating when the armatures were riveted together making rewinding and condenser removal and replacement a major task.

Enter the Model R: Care and feeding to keep yours well. The model R2 ro follow. 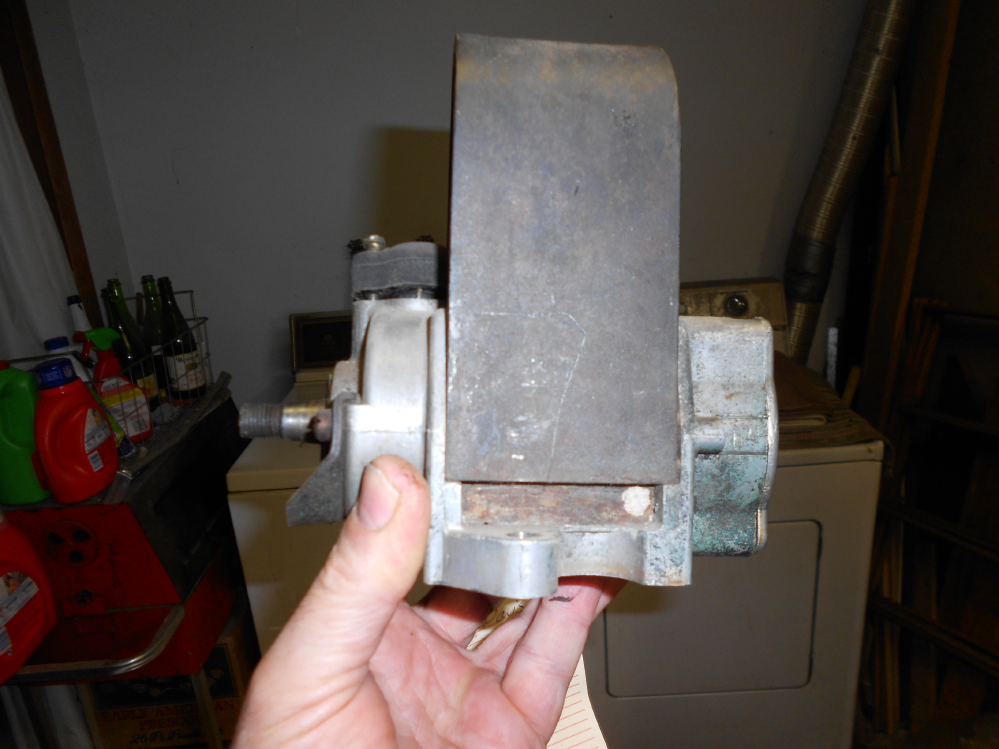 It was probably a huge improvement, totally enclosed,reliable,a more robust design and quite hot back in the day.  It used a strong magnet and a wound armature producing a hot long duration spark. Some versions had collector towers that accepted the usual plug in spark plug terminals. Others used a special connector soldered to the end of the wire that screwed in. Sometimes the two brass screws holding the leadout tower in place appear to have no slots. For some reason the slots are sometimes filled with solder. Get the heads hot with a large soldering gun and quickly clear out the molten solder with a small wire brush. 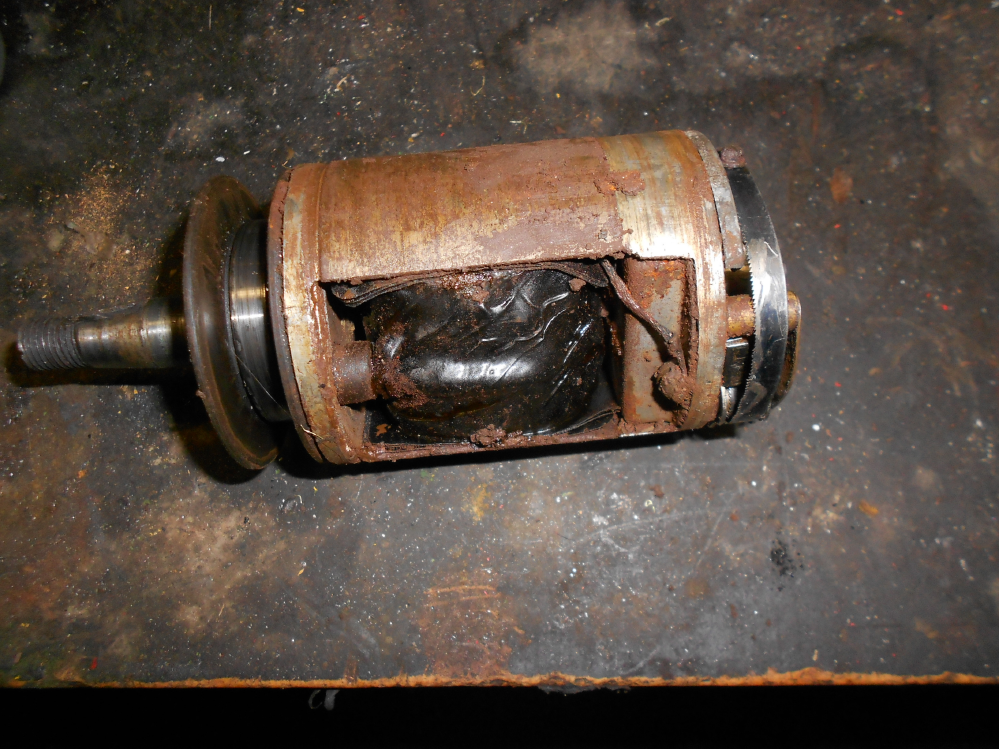 This one was rescued from a ravine and went swimming.  The square component in the base of the armarure under the windings is the condenser (capacitor for the electrical engineering types). It should always be tested for electrical leakage then for capacitance with an automotive condenser tester. If it passes the leakage test (Which it probably won't!) capacitance should come in around 0.16-.22MFD. These are nearly always bad and get replaced.  The points assembly is in the end of the armature. It looks like some pilgrim used a small sawblade as a points spring somewhere in the past. Be very carefull when removing the collector spool as they are breakable and expensive. Do not try to pry it off. First remove the snap ring from the front shaft and try to pull it off by hand. If it refuses, a special puller is needed. 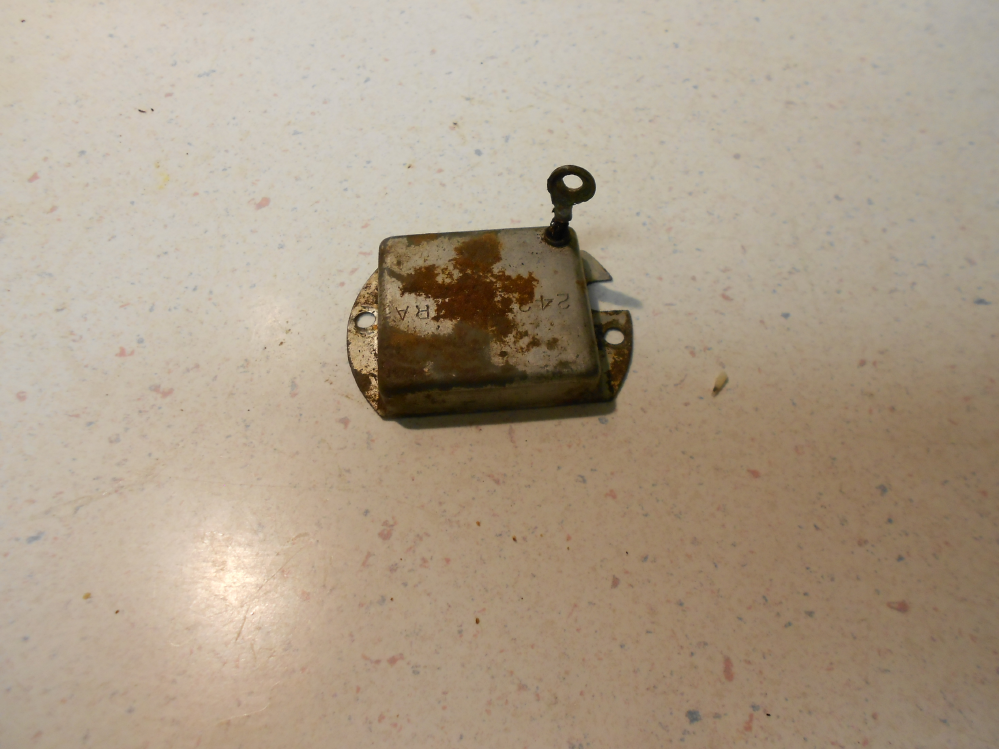 This is the stock condenser. As a rule, especially in the soggy Northwest, these take on moisture and develop electrical leakage. Unlike fine wine they do not improve with age even when sitting on the shelf. Stay away from new old stock condensers, leave them for the collectors of memorabilia. Modern hermetically sealed devices with state of the art insulation are relatively inexpensive and robust. 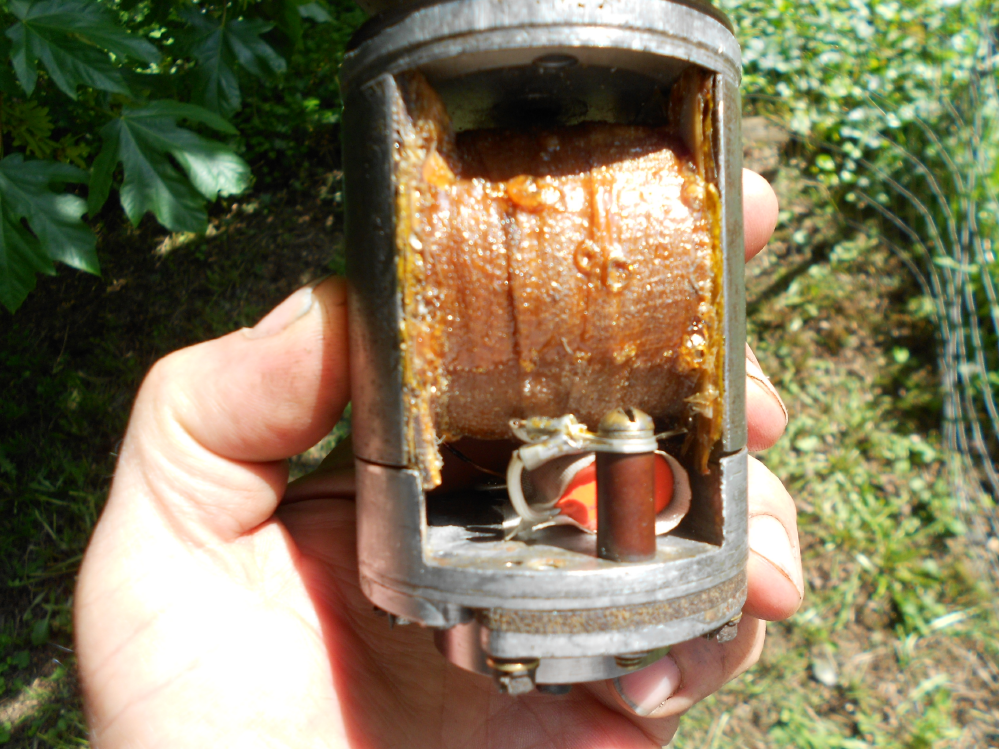 The old capacitor is out and is replaced with a 0.22MFD 400 Volt Sprague/Vishay "Orange Drop" device. Get the device with polypropylene (Mylar) film as they are designed for high spike currents. With a new coil and modern capacitor this mag should be good for another 100 years or so. 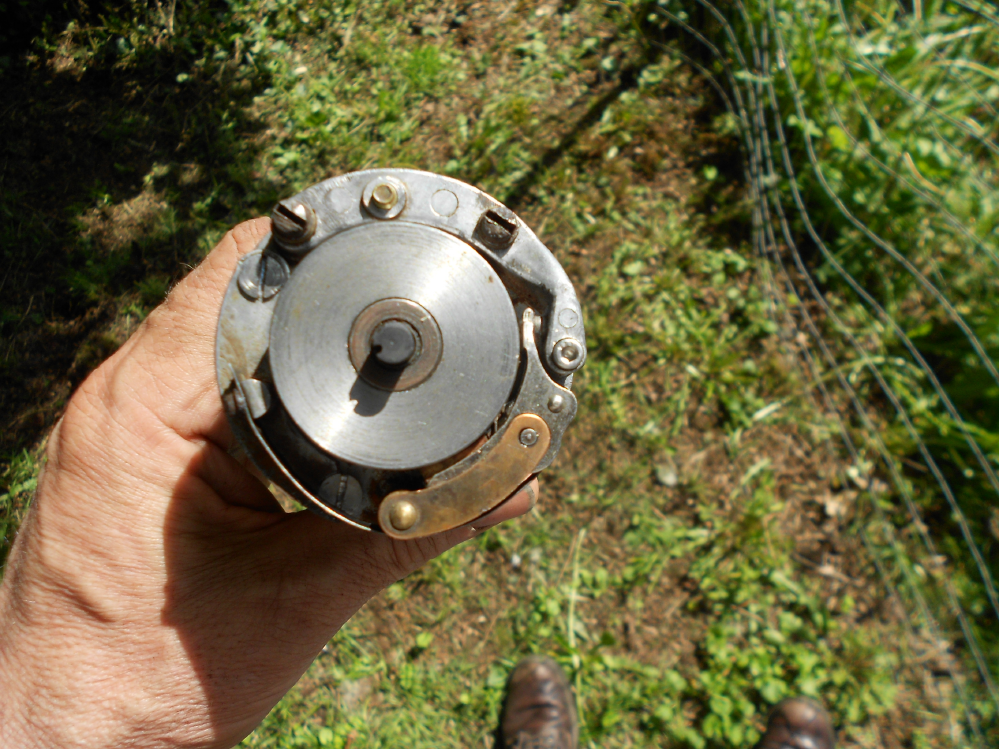 The breaker cam is mounted stationary on the end cap. To set the points we made a sleeve that slips over the 15MM(.591") bearing journal about 40MM(1.575") OD to emulate the high spot on the cam lobe and set the points.The gap should be about .015".  If there is a better way to do this we would sure like to know. Of course get the points smooth and polished to a mirror finish first. If the mag has been in use with a bad condenser, the contact surfaces may be rough and hagged. 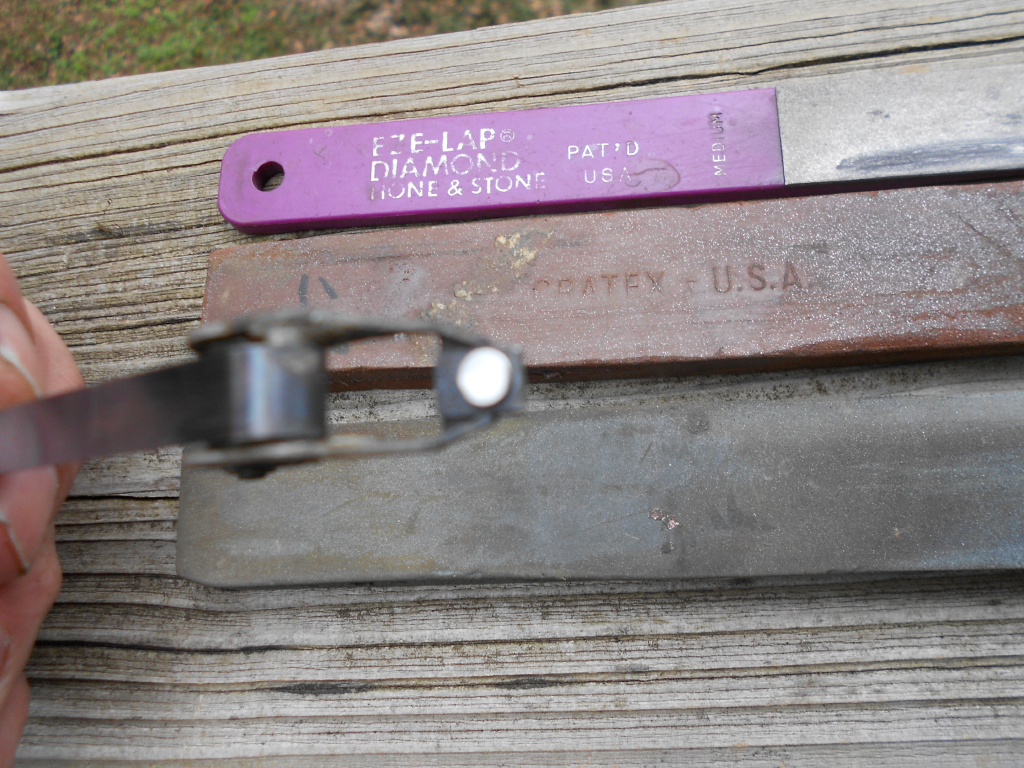 Use the Easy Lap diamond file to get the big blemishes off and polish to a mirror finish with the Cratex rubber abrasive blocks. The red is a medium and the slate is a fine grit. Point files (I think everyone must have one) are far too coarse and remove too much material and leave a rough finish that will tarnish soon. Also recall that these points are hard to find and no longer made.

Fairbanks Morse did not intend to make the armature a serviceable part. It was designed to be replaced as a unit save for the points and condenser and riveted together at the factory. When it is time to rewind the armature, one must carefully drill through the center of the swaged portion of the rivets on the breaker end of the armature and drive them out with a punch. This can be a challenge as they can be rusted and seized in the armature laminations. 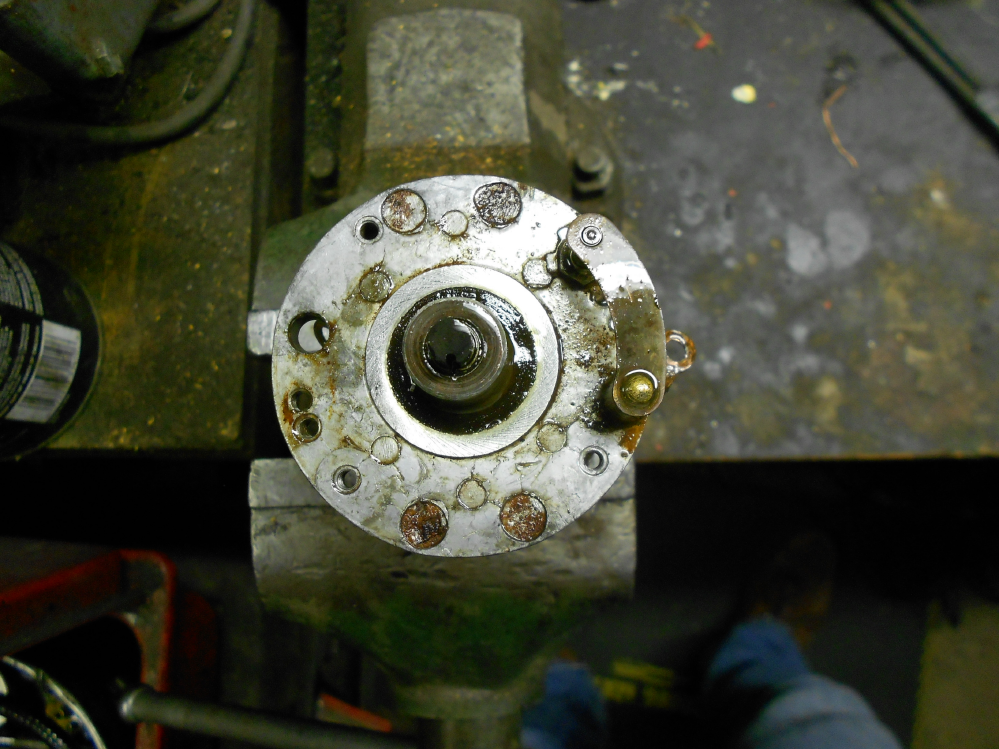 Start with the tapered punch after drilling out the center of the rivet. Give it a good smack and hope it comes  peacefully. Drive it the rest of the way out with the straight drive pin punch. 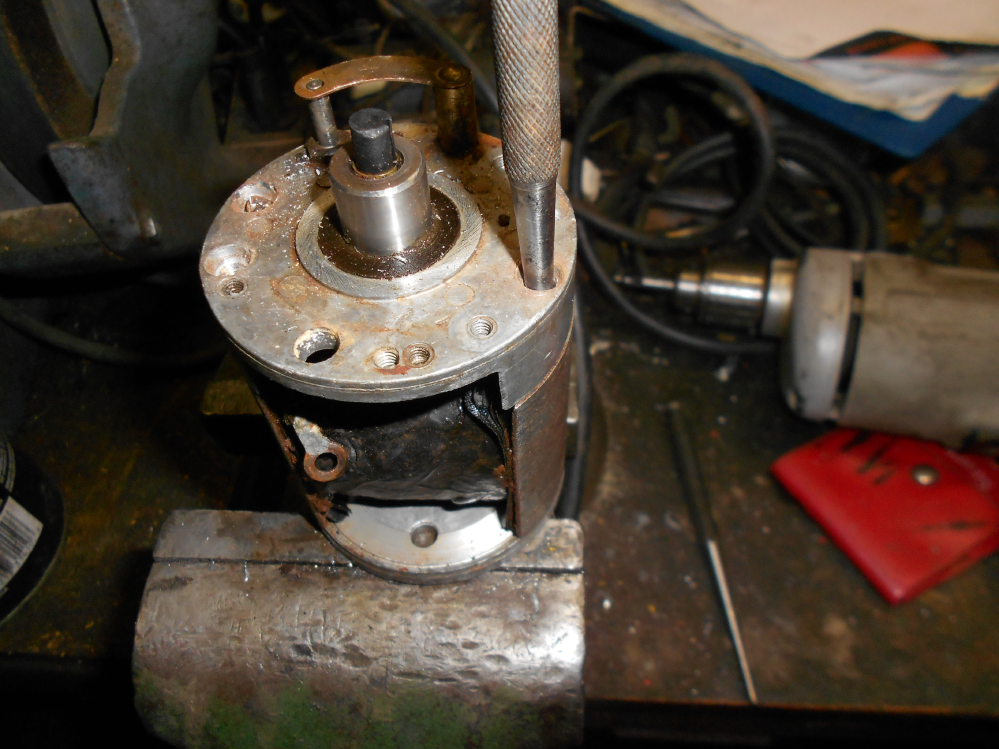 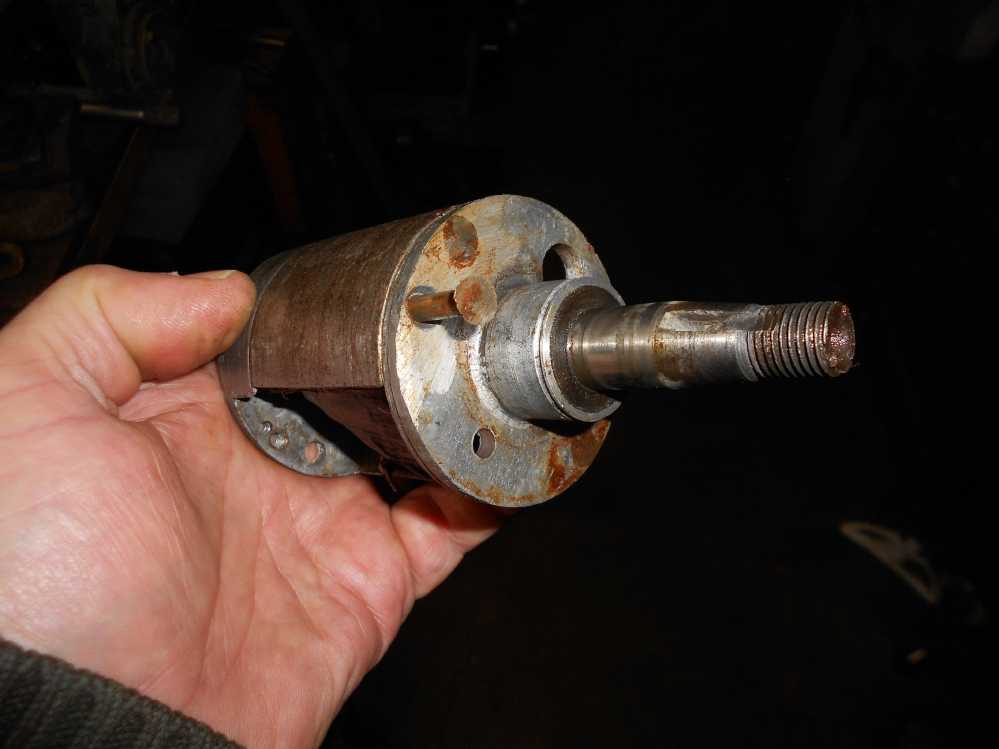 The rivets are 3/16" od which approxiamtes the OD of #10 machine screws. At this point we install 10-32 Helicoil inserts to replace the rivets when reassembling. The 10-32 flat headed machine screws will barely fit after countersinking the end cap holes. Sounds like a bit of work, it is but  makes them good again once rewound with modern insulating materials.