The DU series appeared early on before or during WW1 as a brass or bronze frame and a distributor cap held on by a spring clip on each side. They used slightly smaller magnets and were not totally enclosed but were a better price point than the ZR series. They were robustly made, reliable, hot and probably performed well in the day. Impulse couplers came  later. Some were dual ignition, using a battery, coil on the dash and an extra set of points to get started, then switched to mag output when (sometimes if) running. After WW1 the distributor caps were held on by two 5MMx0.8 hex head screws and the plug wires were held on by 5MMx0.8 knurled nuts. They look a lot like the common 10-32 but are slightly larger and a different pitch. 5MM x 0.8 hex head screws are readily available, as are the taps and dies to service the threads. The 5MMx0.8 Helicoil kit comes to the rescue often.

If you lack the 5MMx0.8 knurled nuts to fasten the plug wires you can take a 10-32 brass knurled nut or plastic knob with the same internal threads and run  a 5MMx0.8 tap through. The outside diameter of the 5MM x0.8 is slightly larger and has a similar pitch. This is a quick, cheap  solution. A sharp tap works best.    The brass or bronze frames were replaced by aluminum and they were rebadged as American Bosch with the familiar logo of Fritz the Flyer.  Many barn fresh original examples survive today in working order. Some later versions came equipped with special front housing endcaps machined and spotted for impulse couplers that probably prevented some blisters, broken bones and discouraging words when trying to get started under less than ideal conditions.

They were a wound armature design sublect to the usual woes of insulation seepage and sticky goo. Condensers were subject to moisture and did not improve with age in damp climates. They reside in the base of the armature and serve as the attachment for the breaker retaining screw. They can be retrofitted with a modern capacitor using the carcass of the old condenser. We like the SBE/Sprague/Vishay "Orange Drop" capacitors with a polypropylene film insulation. They are hermetically sealed and made to handle spike currents. The 0.2MFD 400 Volts DC device fits in the armature base and works well.Higher voltage rating would be desireable, but a higher voltage device is too big to fit the space. These ara available from many antique radio parts suppliers. We found them at Tubes N More out of Tempe, Az. This retrofit is described in the American Bosch ZR4 later edition magneto RX.

Points are often found out of adjustment. one problem that arises is the steel pivot pin on the breaker lever. From moisture and lack of lube they can grow rust and get tight in the phenolic bushing causing the points to float or hang up.The tiny metric screws that fasten the points spring like to fly across the shop and cause discouraging words. Use care when reinstalling them as it is easy to cross thread the screw threads while trying to get the spring to stay put. At least they are a standard metric thread. I like to remove the points lever and give the contact a good polish, then remove the screw that holds the stationary contact and do the same. This is a good time to inspect and relube the points pivot pin.   It is heplful to polish the pin and give it some good grease.The armature is supported by two E15 bearings that are usually found full of petrified grease. It is helpful to every year wipe off the inside of the distributor cap, collector ring, and collector ring pickup brush and holder with brake or electric motor cleaner to clean off any carbon dust from normal brush wear to prevent a carbon track short.

Here are some images from an early factory brochure: The later versions of this model used aluminum frames and two 5MMx0.8 screws to mount the distributor plate and are almost identical otherwise. 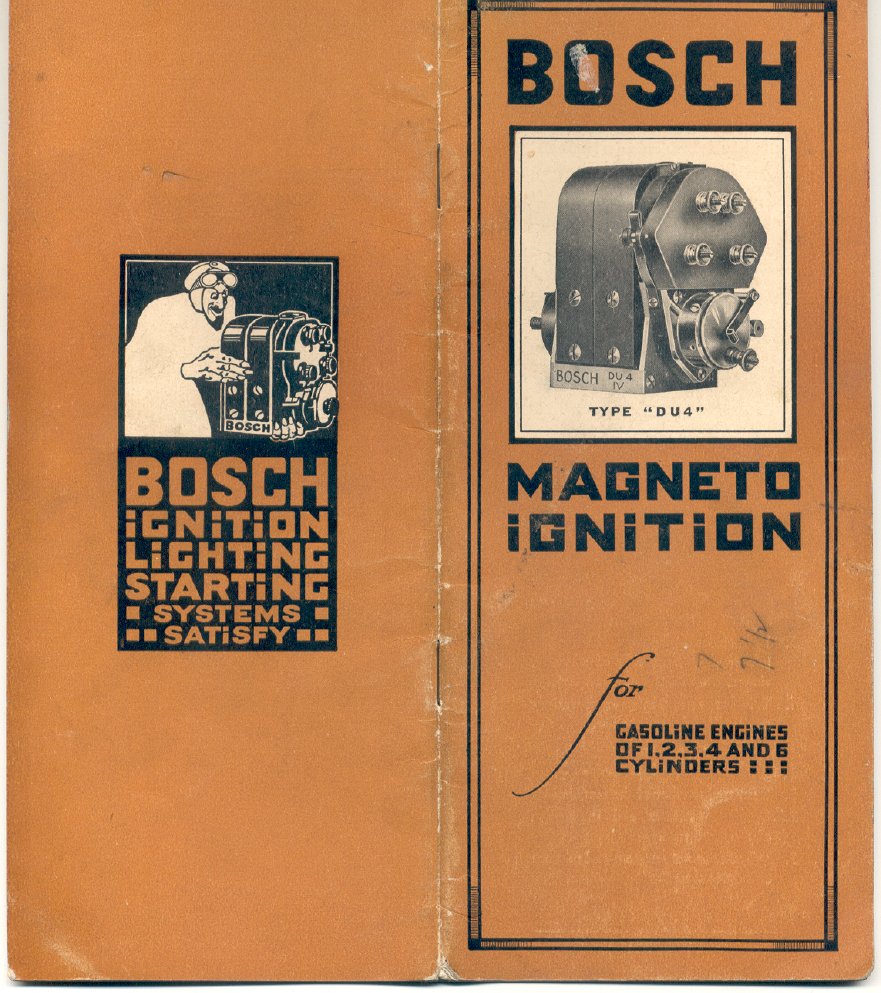 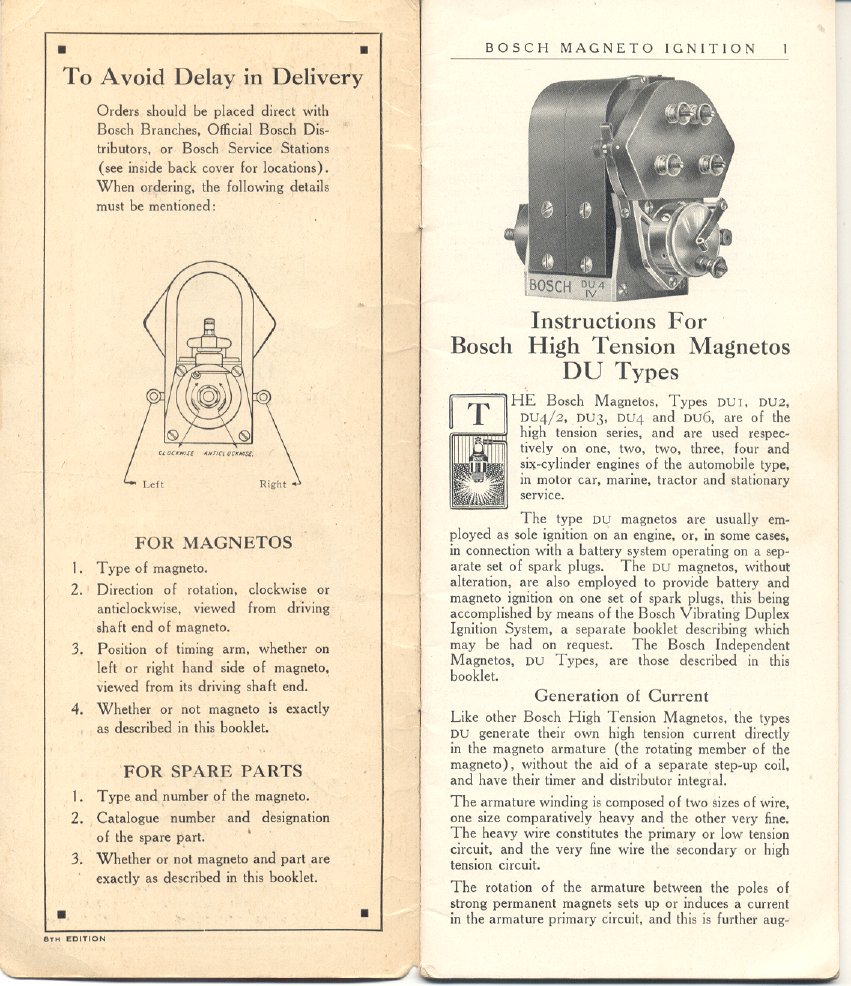 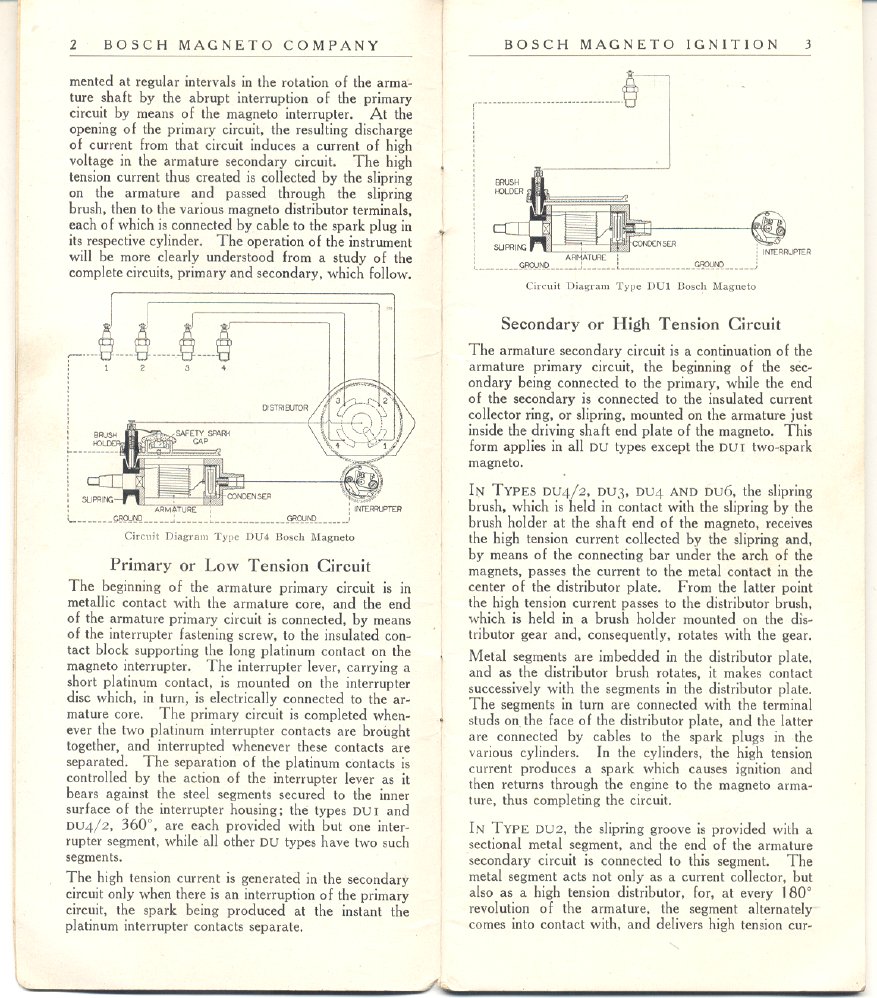 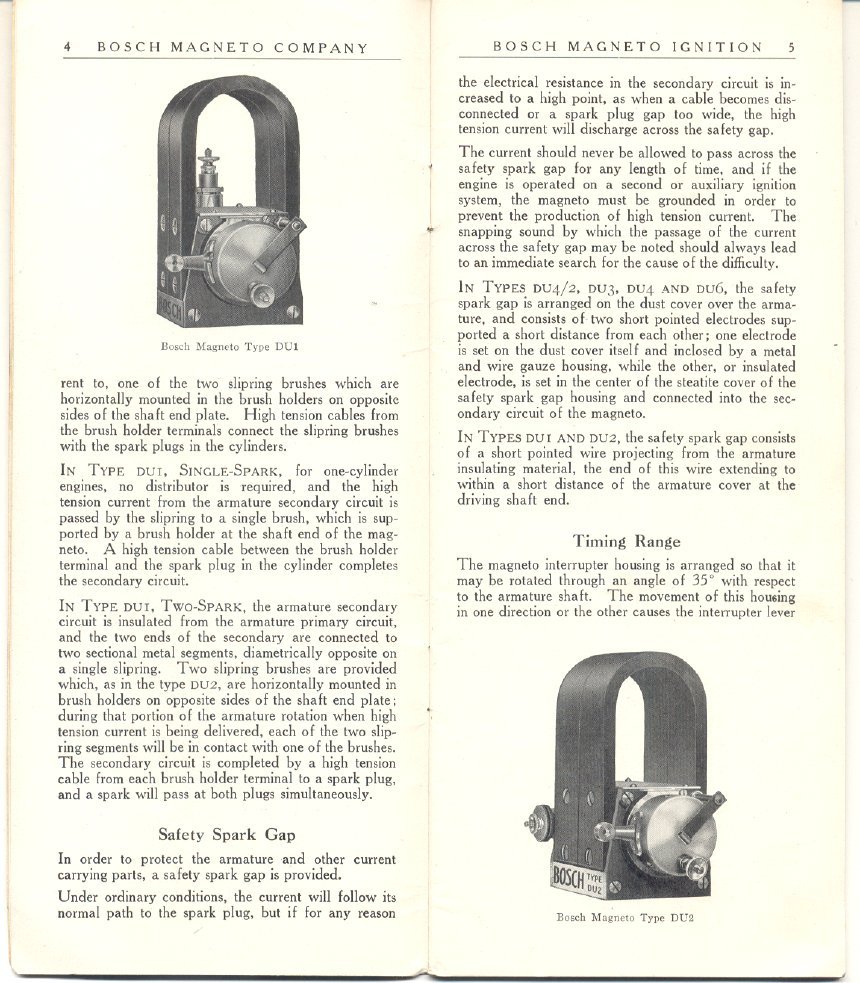 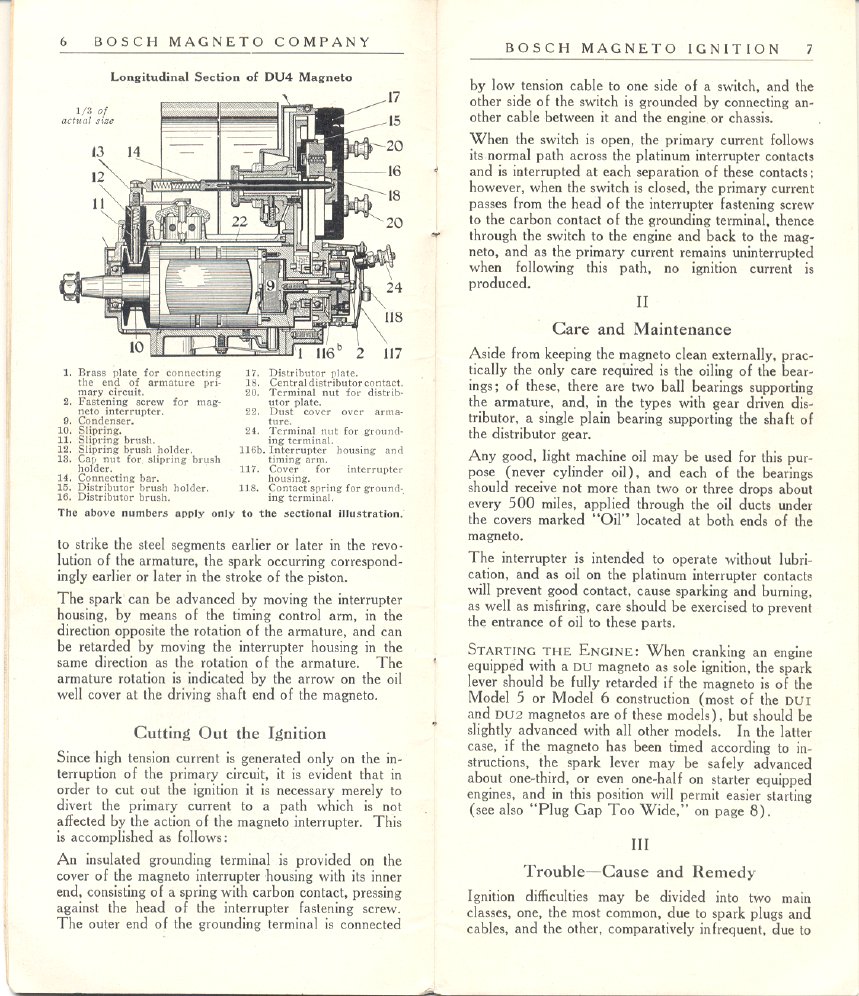 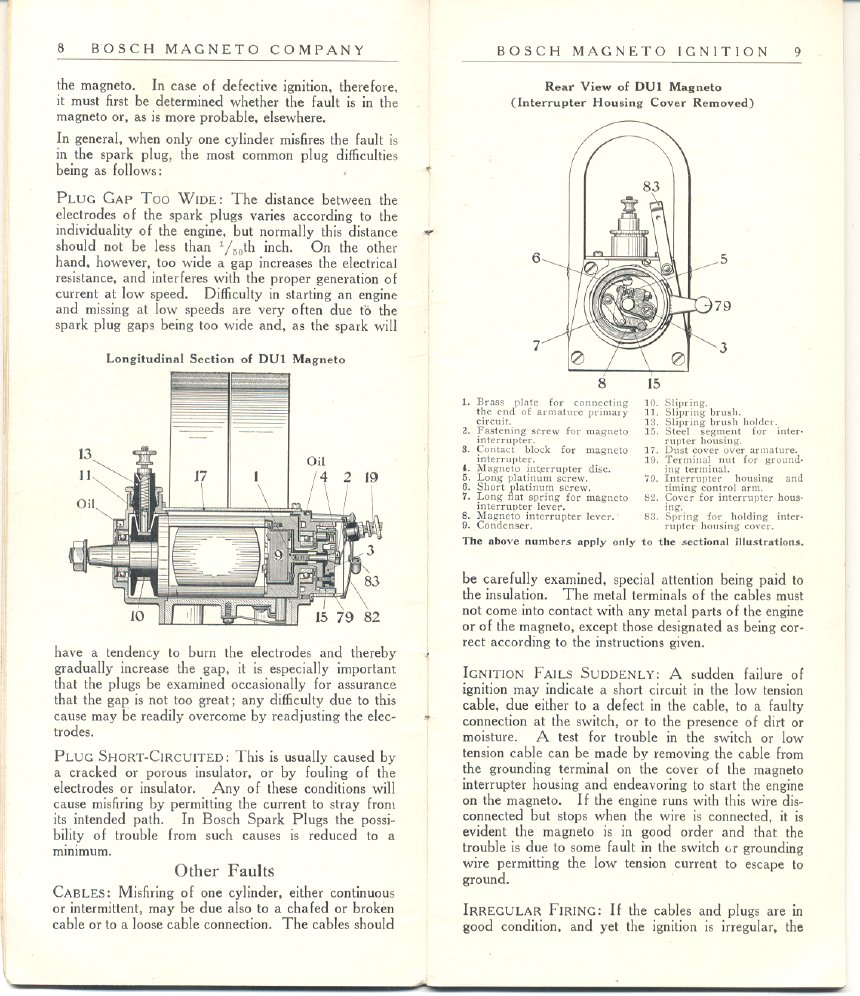 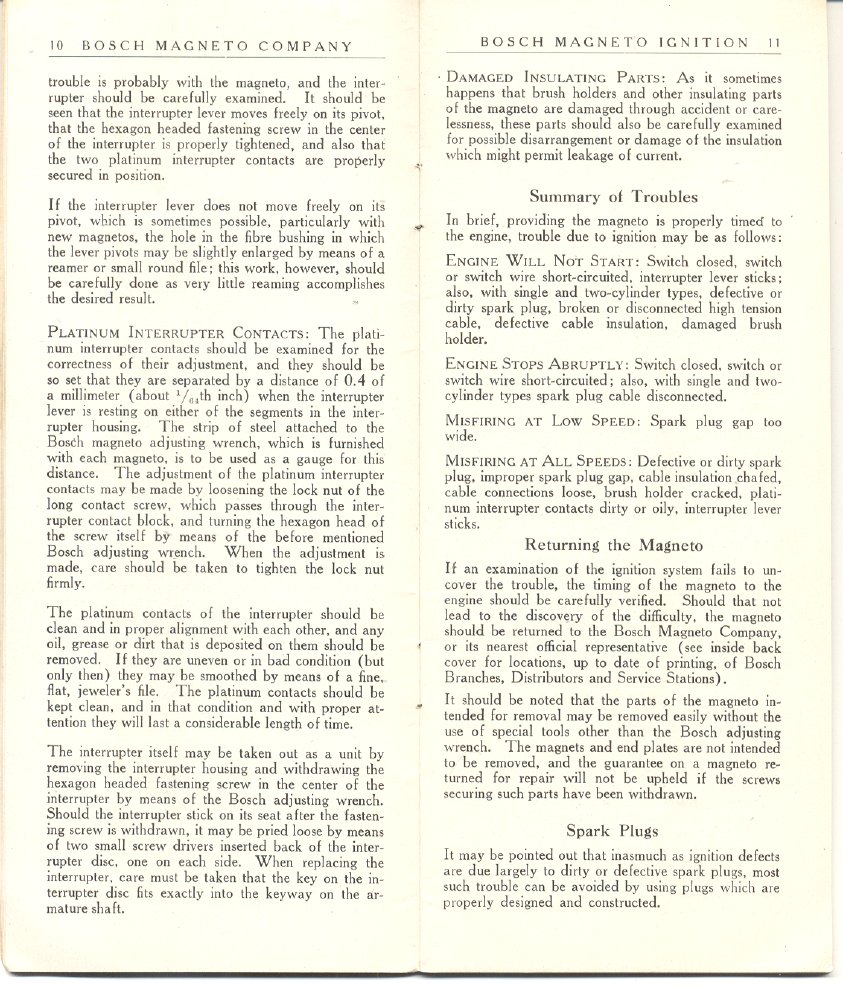 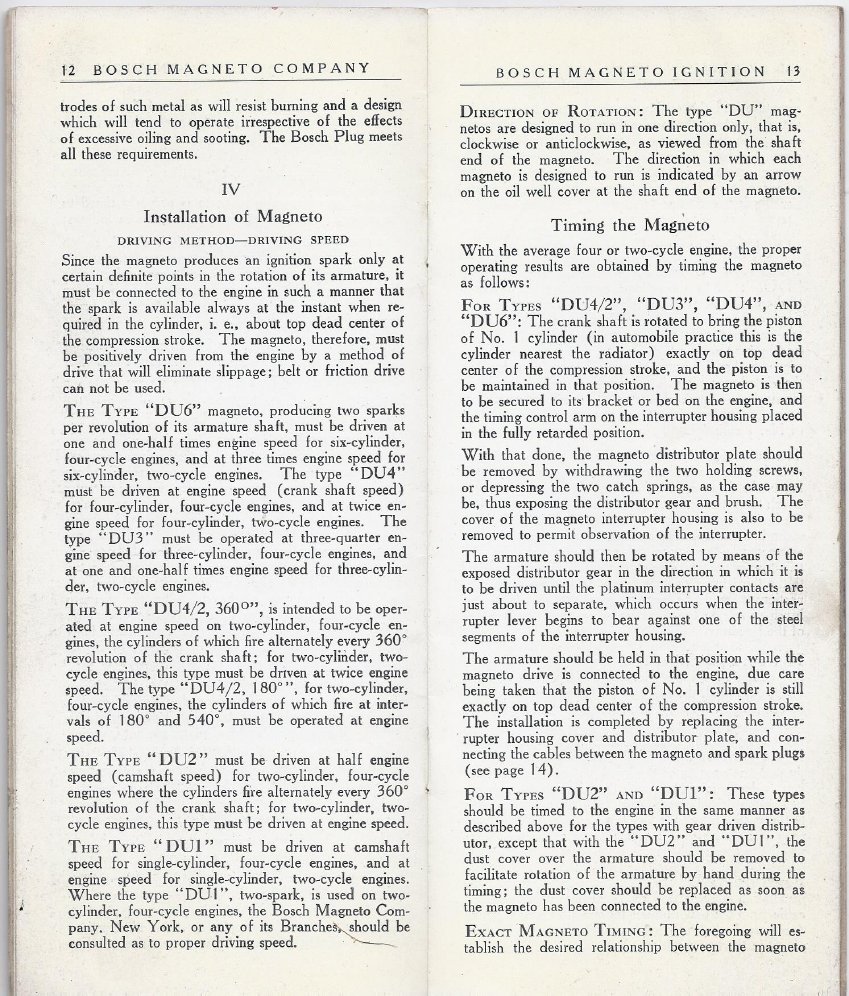 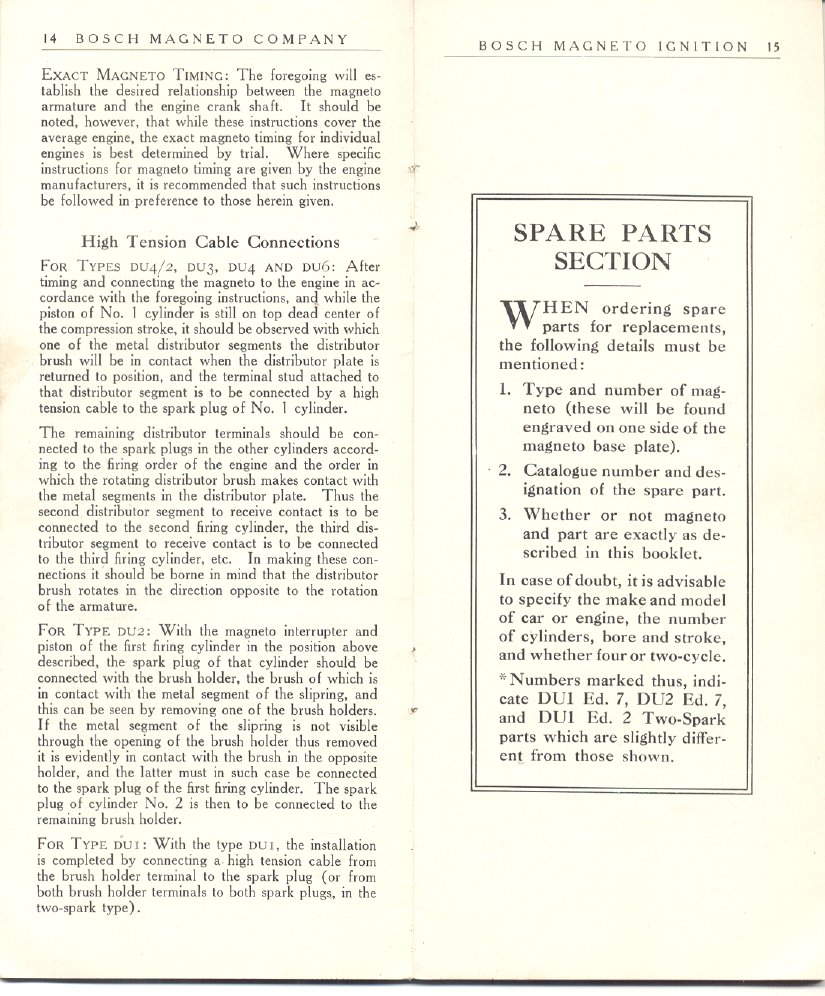 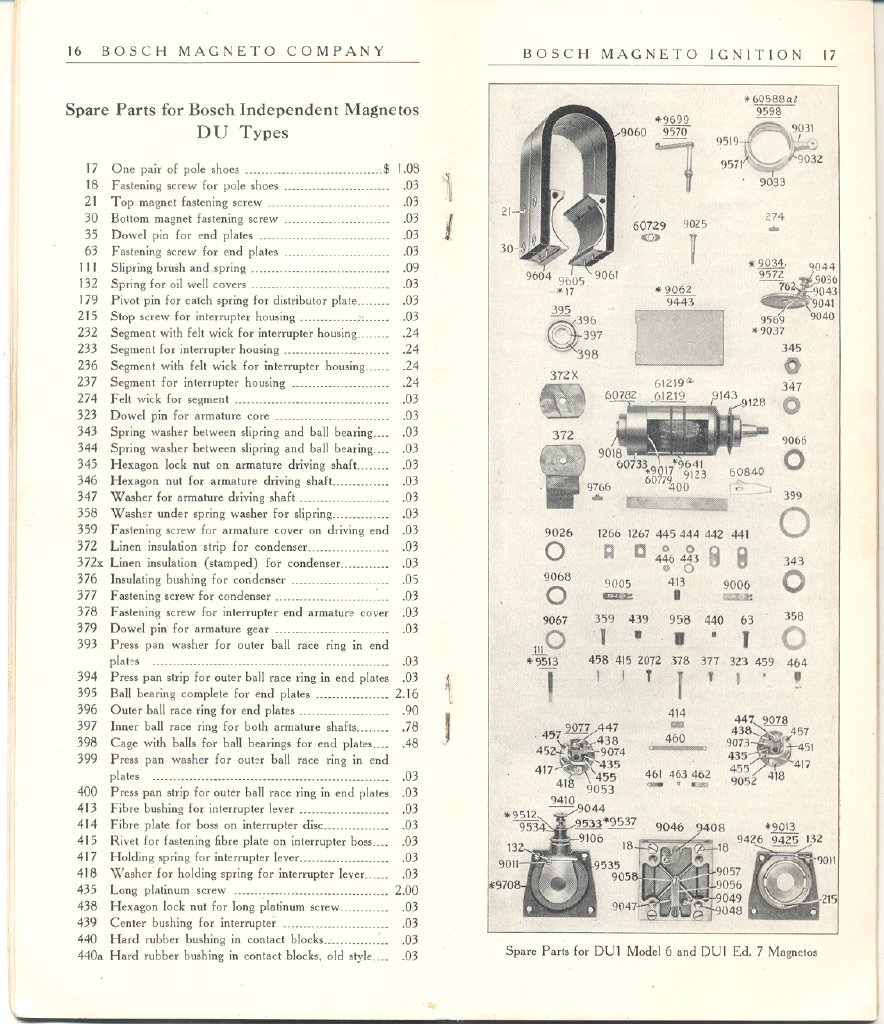 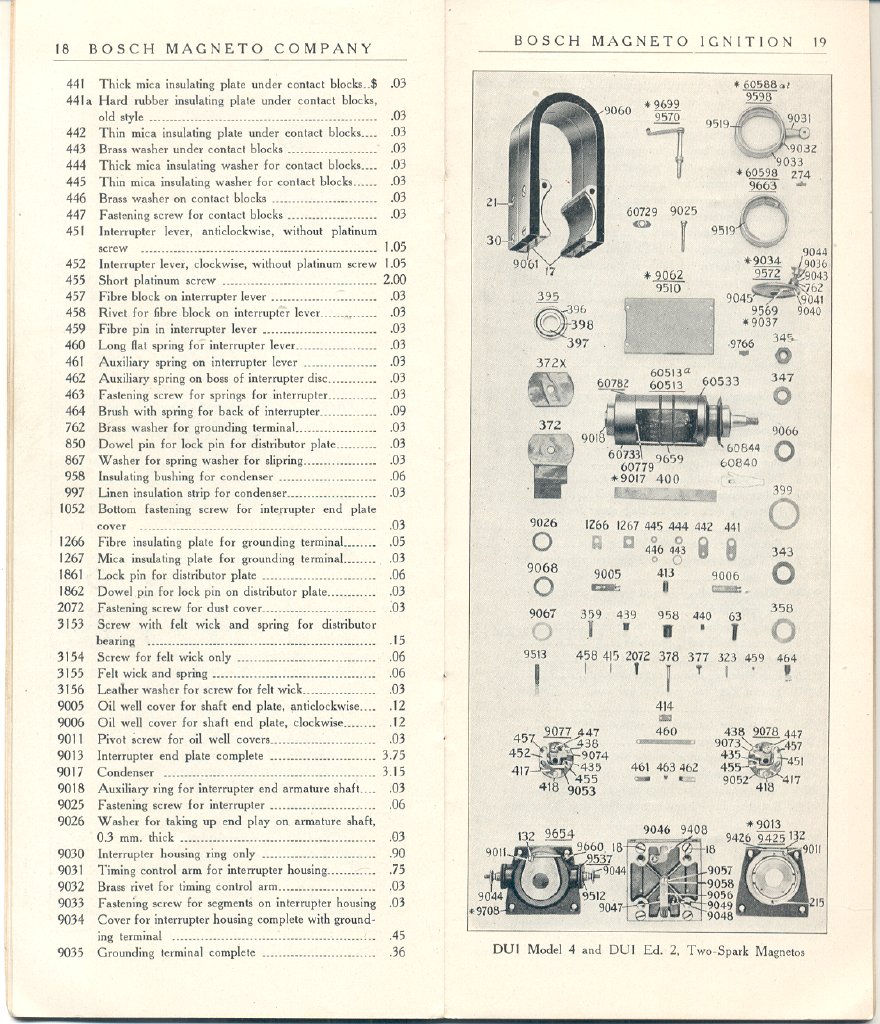 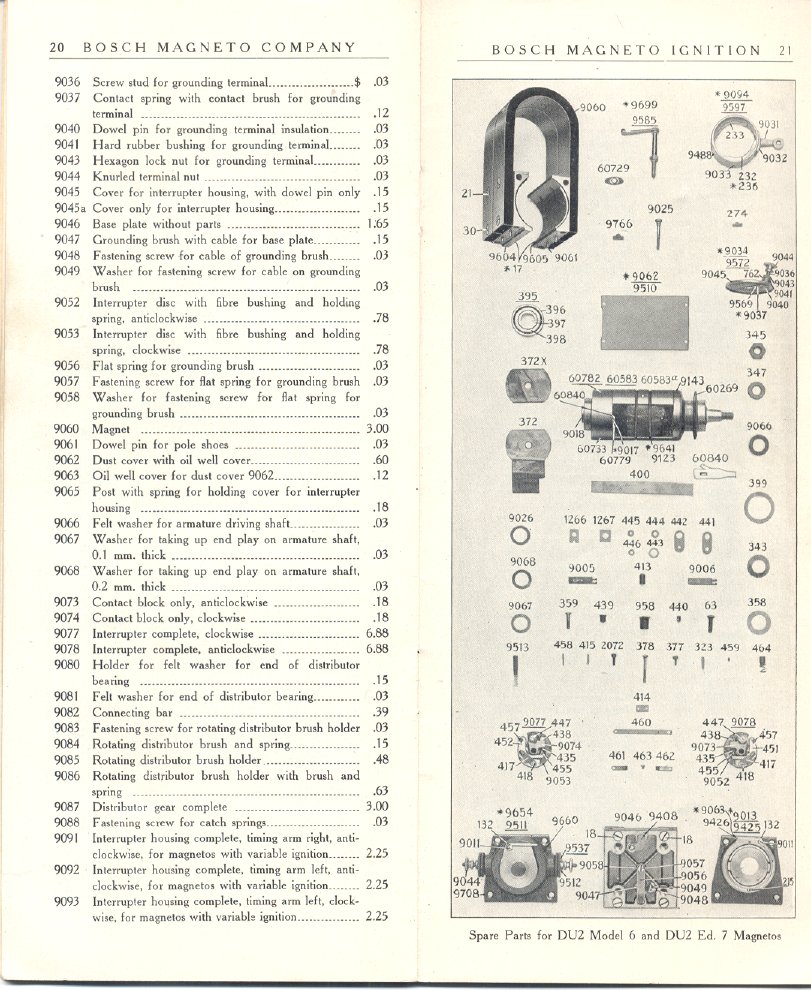 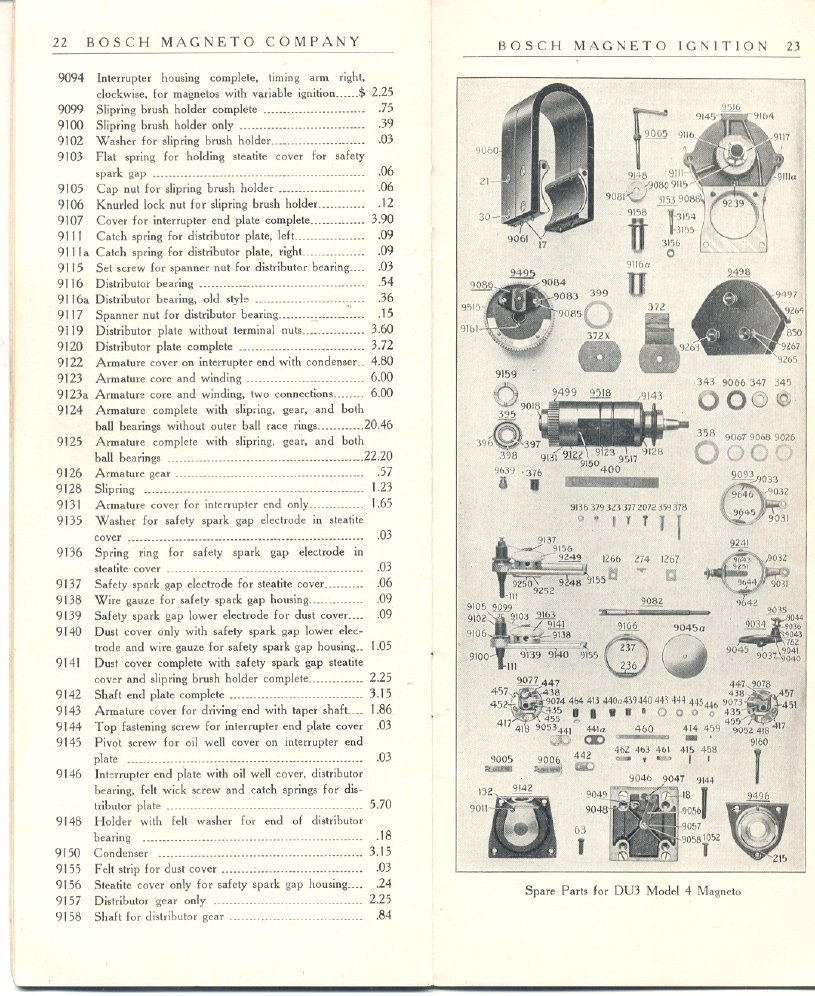 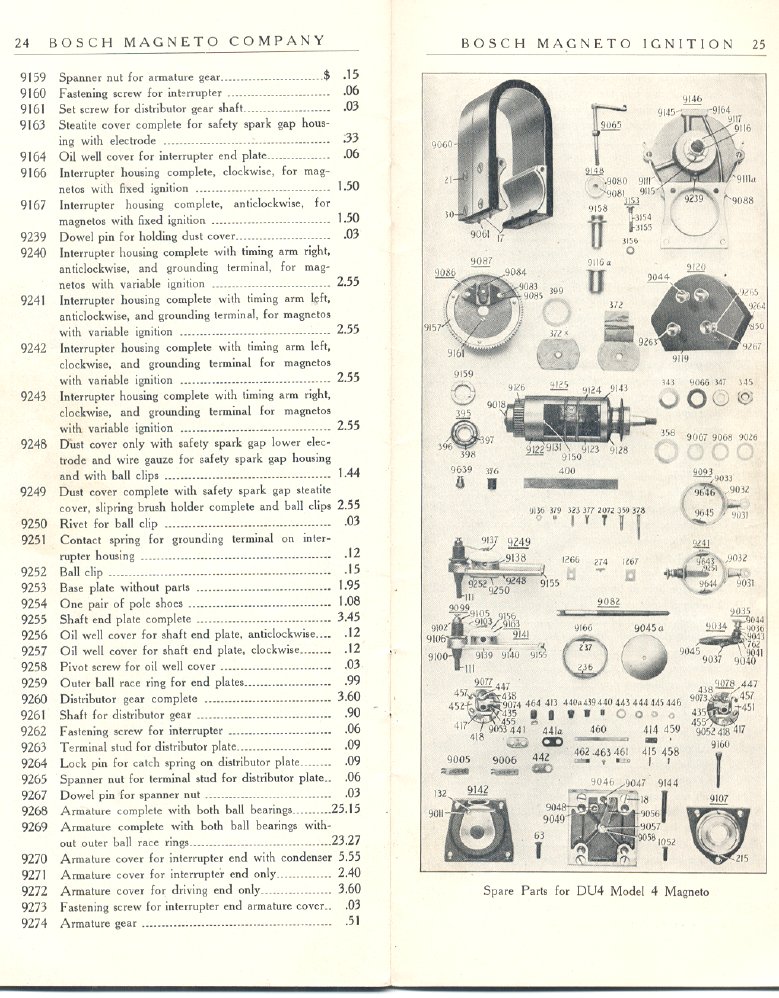 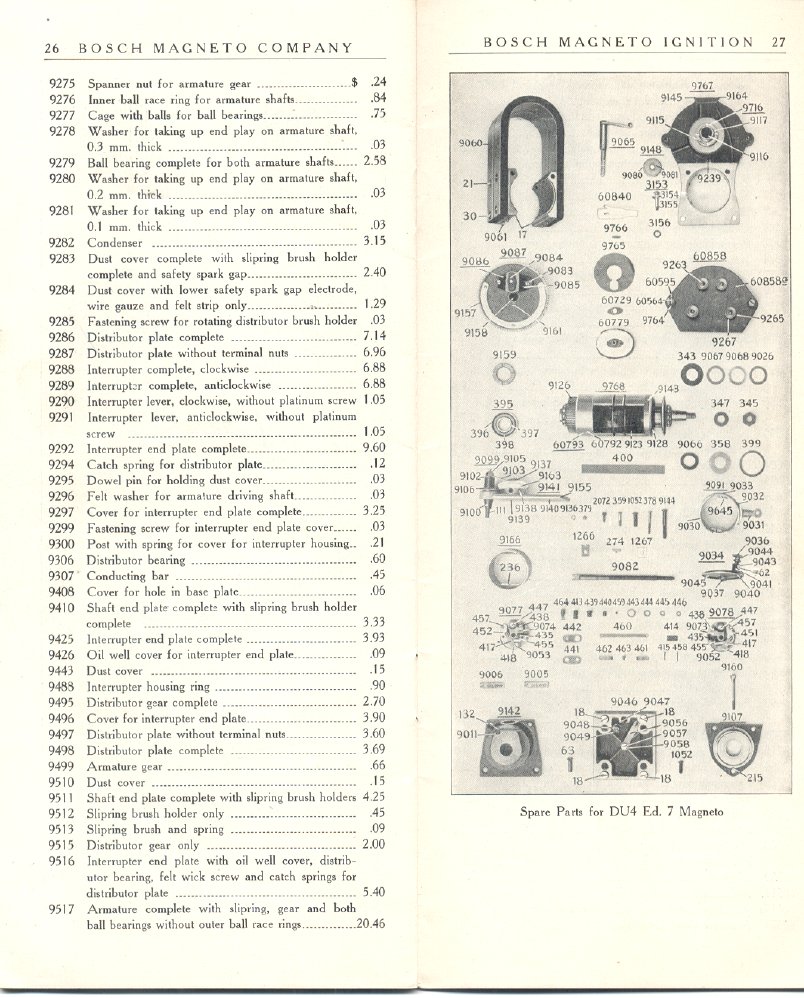 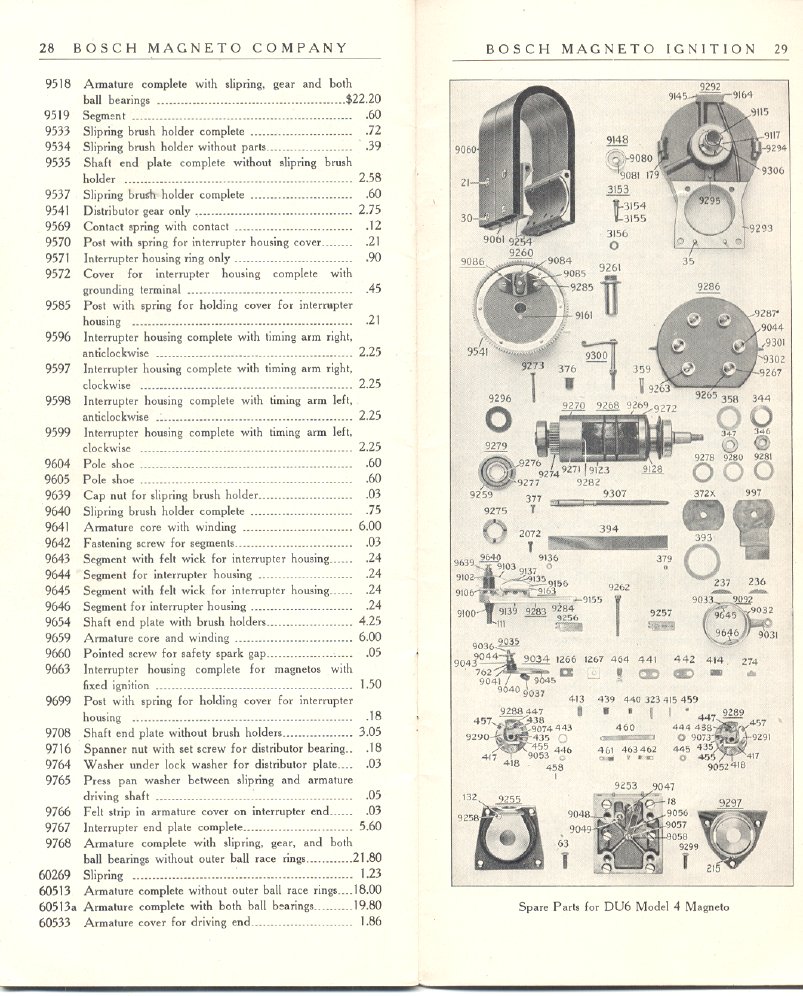 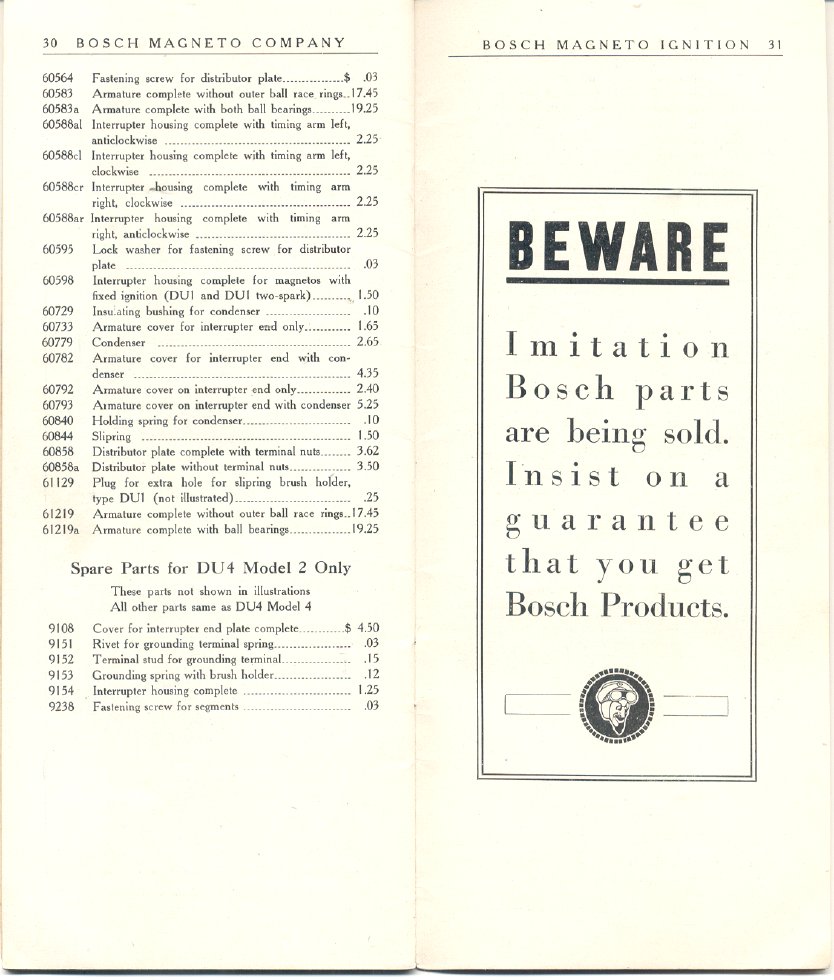 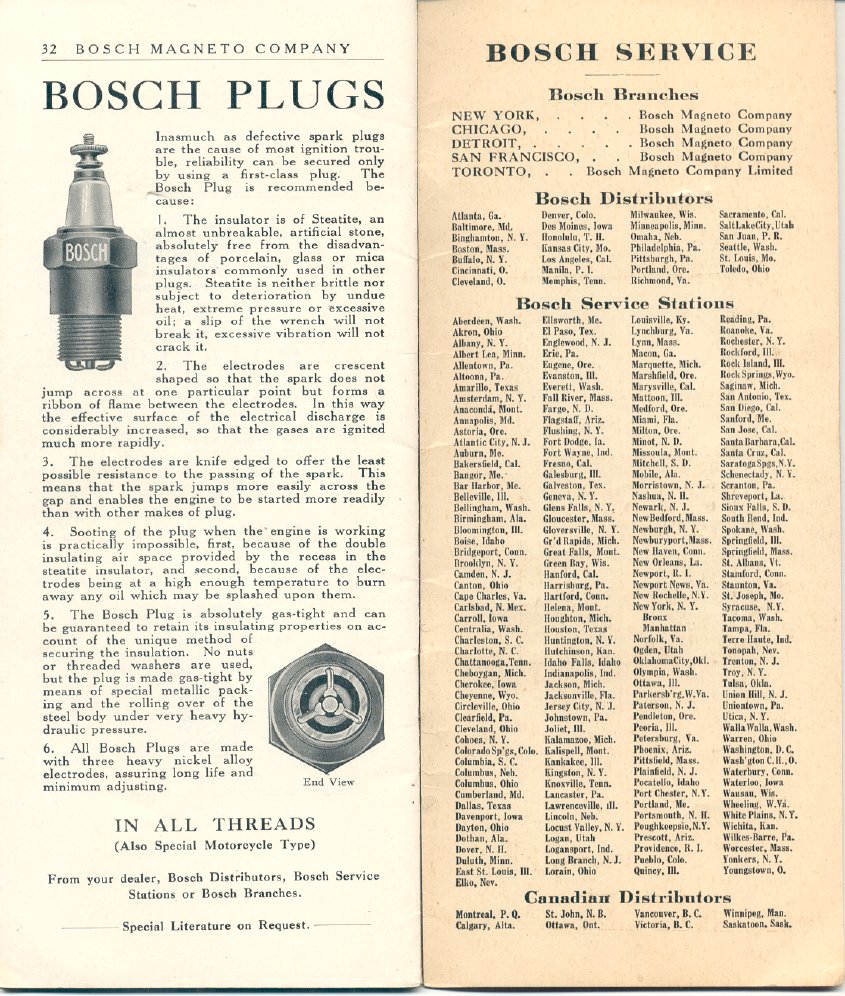